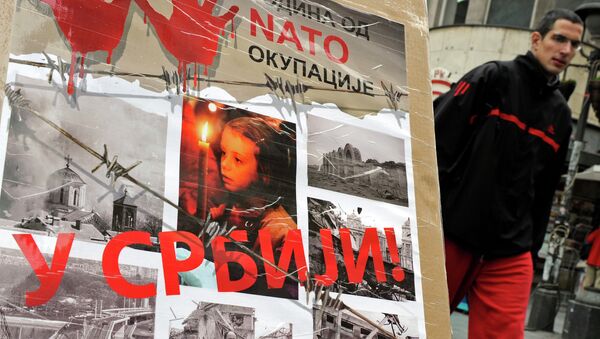 © AFP 2021 / Andrej Isakovic
Subscribe
Sanda Raskovic Ivic, the leader of the Democratic Party of Serbia said that the situation in Montenegro may be further complicated if it joins NATO because many of the people are against it.

Polls Reveal Montenegrin Public Are Against NATO Accession
MOSCOW (Sputnik) — NATO is pursuing its own objectives, like the demonstration of power, by inviting Montenegro to join the alliance and exacerbates the already existing tensions in the country, the leader of the Democratic Party of Serbia told Sputnik on Wednesday.

“I think that NATO made a big mistake inviting Montenegro. The issue of NATO has already divided the country and created an atmosphere of an imminent bloodshed," Sanda Raskovic Ivic said.

She said that the situation in Montenegro may be further complicated if it joins NATO because many of the people are against it.

"It may complicate the situation in Montenegro, because a lot of people are already against that, and do not want to indulge that situation and support [Prime Minister Milo] Djukanovic in the direction to NATO. People want a referendum on NATO in Montenegro, and that should be done,” Raskovic Ivic said.

On Wednesday, NATO invited Montenegro to join the 28-nation bloc, despite deep divisions on the matter inside the country. NATO bombed the tiny west Balkan state 16 years ago when Montenegro and Serbia were part of Yugoslavia.

Montenegro's NATO Coordinator Refuses to Comment on Accession Invitation
If Montenegro joins the US-led military alliance, it will be the first NATO expansion since Croatia and Albania joined it in 2009.

Moscow has been critical of the military bloc’s creeping expansion eastward. Kremlin spokesman Dmitry Peskov said Wednesday that Russia would take countermeasures, although he added it was too early to specify them.

Sanda Raskovic Ivic also stated that Montenegro’s possible accession to NATO may serve as an “ice-breaker” for Serbia, which already has an Individual Partnership Action Plan (IPAP) with the alliance.

“The Serbian government already has the IPAP (Individual Partnership Action Plan) agreement. This is the top level of cooperating with NATO alliance without being its member. The next step is membership. So we reached the top. So Montenegro in a way is like an ice-breaker,” Sanda Raskovic Ivic said.