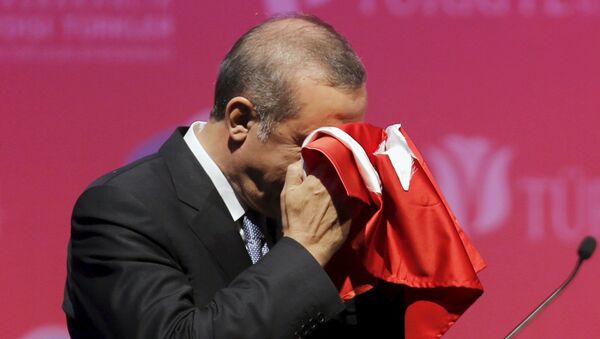 Andrew Korybko
All materials
All of the problems presently wracking the Turkish Republic are directly attributable to Erdogan in one way or another.

Asking for Trouble: Erdogan Drags Europe Into New 'Cuban Missile Crisis'?
Turkey used to be known as a pillar of secularism and stability in the Middle East, but those times seem to be behind it nowadays. The steady Islamization of society that's been undertaken since the AKP first rose to power in 2002 is transforming the very essence of the secular Kemalist state, and the multisided identity conflicts that have lately reemerged are threatening to undermine the harmonic fundamentals that the country depends on. Furthermore, the economy is floundering and human rights are being violated with disturbing frequency, thus weakening the country's social fabric.

If one thinks about it, a very ironic change is taking place in the region right now. Syria, stereotypically painted by the Western mainstream media as the most volatile country in the Mideast for the past couple of years, is becoming more stabilized, secure, and strong as a result of the organic synergy of purpose between the people and their government, buttressed by Russia's anti-terrorist intervention. On the other hand there's Turkey, long lauded by the West as a model for Syria and the rest of the region to emulate, which is now becoming more unbalanced, dangerous, and weak, and the reason for this is none other than the massive miscalculations made by Erdogan.

Let's take a look at everything that's gone wrong in Turkey lately and how Erdogan is directly at fault for it:

The ongoing civil war that's raging in the southeast was completely avoidable, especially considering that both sides were earlier engaged in a constructive ceasefire with one another. Erdogan restarted the conflict precisely as an electioneering tool in order to win over more nationalist votes from the MHP in the second-round elections. A back-to-back comparison of June and November's ballots suggest that he was successful in stealing some of their voters, but the cost was that he returned the country back to civil war and has lost full control of the dynamic. This has unnecessarily spread the military thin and inhibited their ability to protect the hinterland from terrorist threats.

Still No Proof? Free Syrian Army Can Verify Daesh Oil Deliveries to Turkey
Turkey has lately fallen victim to horrific incidents of ISIL/Daesh terrorism (if one is to follow the government's official narrative that the group is to blame), and the entire country is at risk of repeat attacks due to how deeply embedded the terrorists are throughout its territory. Erdogan refused to shut down the porous border and secure its unprotected portions, all out of his feverish pursuit to militantly overthrow President Bashar Assad via hard-core Islamic terrorists.

There's also a personal factor involved as well because reports state that his son Bilal is profiting quite handsomely from trading oil with Daesh. This familial factor might explain why the Turkish strongman is illegally neglecting his constitutional responsibilities in keeping his countrymen safe from terrorism, and it might also be the reason why he's still keeping Turkey's border with Daesh-occupied Syria totally open to this very day.

What's not commonly reported in the Western mainstream media but is a factor that all Turks are aware of is that the country is facing an existential identity crisis. The Kemalist secularism that constitutionally defines the Turkish Republic is being de-facto replaced by Erdogan's Islamism, and the growing divide that this is creating between the cities and the rural areas explains the widening geo-electoral rift that's evident in the country.

Erdogan's sympathy towards the Muslim Brotherhood and desire to implement their ideology across all strata of Turkish life is well-documented, but interestingly, this very same organization is officially designated as a terrorist group by Syria, Russia, and Saudi Arabia (one of the very few instances of political agreement that Damascus and Moscow have in common with Riyadh). Now Erdogan wants to change the constitution to give more power to the presidency (his current position), but many of his critics believe that this is a ploy to eliminate the legal foundation for secularism and slyly enshrine the Muslim Brotherhood's teachings as the supreme law of the land.

Erdogan's leadership (be it as Prime Minister or President) has seen a marked backtracking on fundamental human rights such as the freedoms of speech (the periodic blocking of social media), press (the jailing of opposition journalists), and assembly (the Gezi Park crackdown). These aren't mere fits of rage on the part of an unpredictable psyche, but premeditated actions designed to crush dissent, intimidate critics, and advance the one-party Islamist rule that he's envisioned for Turkey ever since he first came to power in 2002.

The Turkish economy was naturally slowing in tune with the rest of the world amidst the Great Recession, but the country's structural challenges will undoubtedly be made more acute by the Russian restrictions that were recently implemented in response to Turkey's aggression. If the economy continues to decline, then it might be the final spark that's needed to generate a renewed anti-government movement modeled off of the tactics and organization of the historic Gezi Park protests.

As Erdogan sees it, his increasingly authoritarian and Islamist rule could be reversed by either a pro-democratic uprising or a military coup, and he has no idea how to deal with these two factors simultaneously. He's proven himself adept at handling them individually before, but never in combination, and herein lies the Turkish strongman's dilemma.

The degenerating economy and rising social tensions are giving birth to emboldened grassroots opposition to his rule, and Erdogan is afraid that this could one day turn into a nationwide version of the earlier Gezi Park movement. Concurrent with this, the military is spread ridiculously thin between fighting the Kurds and trying to intimidate the Syrians, and this has opened up too many vulnerable blind spots in the heartland that are now vulnerable to terrorist attacks.

Logic would dictate that Erdogan should redeploy some of the military from these fronts in order to secure the cities, but the Turkish strongman is afraid that this would make it all the easier for the armed forces to stage a secular coup against his Islamist government (such a move wouldn't be unprecedented). As regards a Gezi Park 2.0, if Erdogan were rational, he would backtrack on his imposed Islamism and abandon the Muslim Brotherhood project, but he's gone so far already that he can't retreat without betraying the influential base that he's nurtured for over a decade and possibly producing violent pro-Islamist protests.

The societal divisions that he's created might eventually lead to a large disruptive movement in one shape or another (be it secular/pro-democracy or Islamist/pro-autocracy), and in the end, he might be urgently compelled to call the military into the streets and inadvertently facilitate the very same coup scenario that he's trying so desperately to avoid.

No matter what form it takes, it's very likely that the myriad of opposing identities actively organizing within the Turkish state will find a pretext to clash with one another and take the country down a very turbulent path in the near future. The civil war against the Kurds is a major destabilizing factor, but one shouldn't overlook the other less known but equally impactful conflicts that could predictably pop up sometime soon.

Is Turkey Waging War on Russia in Crimea, the Caucasus, and Central Asia?
Secular and Islamist protesters (politically represented by the CHP and AKP, respectively) could come to blows as social tension reaches an all-time high, and the MHP-affiliated "Grey Wolves" (a hyper-nationalist organization that Russia is mulling to ban as a terrorist group) are the ultimate wildcard in this scenario. Extreme left-wing organizations like the Revolutionary People's Liberation Party-Front (designated as a terrorist group by Turkey, the EU, and the US) could also more assertively rear their head amidst any unfolding pandemonium, and the shadowy supporters of Fethullah Gulen (presently in self-imposed exile in the US) might make their presence known and engender an intra-Islamist split within the AKP. Finally, the 2 million Syrian refugees in the country might finally get fed up enough with their living conditions that they riot and trigger even more unrest.

If Erdogan is a Sultan like some have justifiably likened him, then he looks to be following more in the footsteps of Mehmed VI, the last Ottoman ruler, than those of Suleiman the Magnificent when the Empire was at its strongest.