Coming Home to Roost: Kosovo Sees Return of Locals Who Fought for Daesh 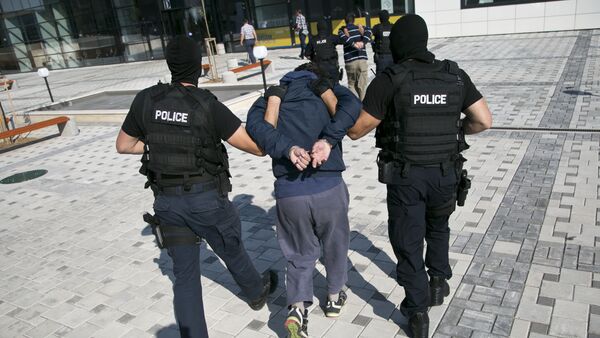 © AP Photo / Visar Kryeziu
Subscribe
At least 120 natives of Kosovo have returned home during the last few years after taking part in the ongoing hostilities in Syria on the side of Daesh (ISIL), according to local police reports.

Echo of Wars: Guns Used in Paris Attacks Came From Balkans
Milovan Drecun, chairman of the Serbian parliamentary Committee on Kosovo-Metohija, told Sputnik that these former militants may establish ties with local political extremists, thus further exacerbating the current volatile situation in Pristina. He pointed out that ties already exist between the jihadists and certain Albanian organized crime groups, as well as former militants of the Kosovo Liberation Army (KLA) – a terrorist group that was officially disbanded but still exists.

"These ties were established back in the 1990s, after Osama bin Laden visited Albania," Drecun said. "In the meantime, radical Islamists strengthened their position in Kosovo, even gaining a certain degree of independence. We know about their contacts with the former commanders of the KLA and Kosovo Protection Corps as well as with members of Drenica Group (Drenicka grupa), a criminal organization run by Hashim Thaci."

Drecun added that on numerous occasions, he has warned about the existence of a well-organized, trained and supplied ‘base’ of radical Islamism, jihadism and terrorism in the Balkans. So far, however, this ‘base’ was mostly used as a source of recruits for the terrorist groups.

"The presence of former Daesh militants in Balkans is a potential security threat and hints at the possibility of terrorist attacks and suicide bombings," Drecun said.

Italian, Kosovan Police Arrest 4 Terror Suspects
He added that while the current situation in Balkans remains more or less stable, Daesh militants have already listed the region and Serbia in particular among their targets during their latest video address.

It is only a matter of time before Daesh becomes ‘active’ in the Balkans, Drecun said.

Residents of the so-called Kosovo republic are statistically more likely to fight for Daesh than any European nation; The Telegraph reports that just one town of 30,000, Kacanik, managed to send two dozen local men to join Daesh's dubious cause. The inefficient local authorities, ailing economy and soaring unemployment make this territory a fertile source of recruits for terrorist organizations.