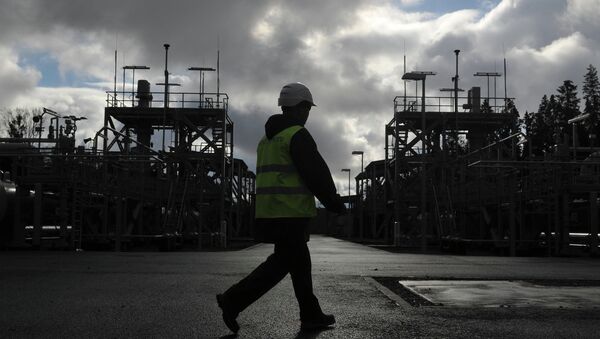 An expert speaking to independent Russian newspaper Svobodnaya Pressa suggests that Washington may be playing the role of 'coordinator' in the campaign by several Eastern European countries to try to prevent the Nord Stream 2 gas pipeline from being built.

Eastern European States Trying to Derail Russo-German Nord Stream 2 Project
Nine Eastern European countries, including Poland, Slovakia and the Baltic states, are petitioning to block the construction of the pipeline, which, if built, would bypass Eastern Europe on its way to Germany, connecting to the Opal and Nel pipelines, thus supplying other countries in Western Europe.

In their letter to European Council President Donald Tusk, summarized by Britain's Financial Times, the Eastern European nations are demanding that the proposed pipeline be put on the agenda of December's leadership summit.

Commenting on the letter, Svobodnaya Pressa journalist Vasily Vankov noted that "it is not difficult to guess that the signatories calling for the obstruction of another Russian energy project are [mostly] members of the traditional anti-Russian camp," with the "document speculating on the topic of 'Europe's dependence on Russian gas,'" which purportedly runs counter to the bloc's "energy diversification and security policies."

So far, Berlin, together with European Commission President Jean-Claude Juncker, has resisted pressures from the EU's new members, suggesting that the purely commercial project should be allowed to proceed if it complies with the supranational bloc's internal market rules.

Speaking to Svobodnaya Pressa, Alexandr Pasechnik, the Head of the analytical department of Russia's National Energy Security Fund, noted that he believes that despite the efforts of Poland and the Baltic states, Nord Stream 2 has good prospects.

Nord Stream Gas Pipeline None of EU’s Business – German Media
"I think that Gazprom will try to speed up the project, especially now that a large pool of influential European partner companies has been formed," the analyst noted. The shareholders, Pasechnik recalled, include big players in the West European energy market, including Germany's E.ON and BASF/Wintershall, Royal Dutch Shell Group, Austria's OMV and France's Engie. "Naturally, these companies have a direct interest in seeing the project's speedy implementation."

With "Western Europe serving as the main beneficiary of the two new lines of the North Stream," Pasechnik noted that nevertheless, some officials in Brussels, including EU Energy Commissioner Maros Sefcovic, continue to see Nord Stream II as a project with political and security implications.

"Russia, for its part, has not backed away from its strategy of building supply routes to bypass Ukraine. In this regard, the expansion of the Nord Stream by another 55 billion cubic meters of gas per year (equivalent to 28.7% of all of Gazprom's exports in 2014) will allow it not only to reduce its transit dependence on Ukraine, but also to substitute the capacity of the cancelled Turkish Stream," which would have had the capacity to ship 31.5 billion cubic meters of gas per year to Europe and Turkey.

With Berlin looking to increase the use of natural gas following the closure of its nuclear plants, other benefits of the proposed pipeline, Pasechnik noted, ironically include energy security for many of the Eastern European countries which have stepped out against the project, especially "should Kiev once again decide to engage in energy blackmail, siphoning supplies bound for Europe and forcing Gazprom to turn off the taps."

Nord Stream 2 Spells Bad News for Kiev's Transit Business
Energy Development Fund Director Sergei Pikin, also convinced of Nord Stream II's potential, explained that other benefits of the project include a direct connection to Western Europe, and, even more importantly – the fact that Gazprom "will be working in a consortium with European partners," which means that the project will not fall under the EU's Third Energy Package legislation, designed to ban one company from owning both the pipeline and the gas flowing through it.

"We build the pipeline up to the shores of Germany's Greifswald," Pikin noted. "From there, the infrastructure will be built by the Europeans, and Gazprom's share in the ownership of European networks will be zero."

According to Pikin, apart from Slovakia, which makes a healthy profit from the gas bound further West, "the fact that Poland and the Baltic countries have joined in the attempt to sabotage North Stream II is really nonsense."

"How are they in any way related to this project?," the analyst pondered. "Unfortunately, there is really nothing surprising that our traditional energy 'spoilers' in Europe [continue] to carry out the geopolitical whims of Washington. At the moment, they are carrying losses after having built regasification terminals and buying up American LPG, once again demonstrating the lack of any rational economic motivation among the countries of the 'cordon sanitaire' built around Russia by the Americans."

Asked whether politics can ultimately be left out of the equation, Pikin noted that nothing can be guaranteed, particularly if something occurs in the conflicts in Syria or Ukraine, leading to a dramatic worsening in relations between Russia and the West.

"If this occurs," the expert notes, "Chancellor Merkel will explain to Western European energy companies, on a political level, that they cannot cooperate with an 'aggressive' Russia." In any case, the expert suggests, "Washington and its loyalists in Eastern Europe will continue to put all possible forms of pressure on Berlin.

"The main thing," Pikin notes, "is to find the right lobbyists. When we were negotiating on the [now canceled] South Stream, we were supported by the Bulgarians and the Hungarians. These were weak lobbyists, with only Austria able to 'show its teeth' to Brussels. Germany, on the other hand, is a pillar of the EU's economy; the whole EU can be said to be built under it. We offered Berlin the opportunity to become a major European energy hub, and to earn money on the supply of gas to its smaller partners. [So far,] Merkel's government has agreed, and they are fully able to carry on negotiations with Brussels on their own."