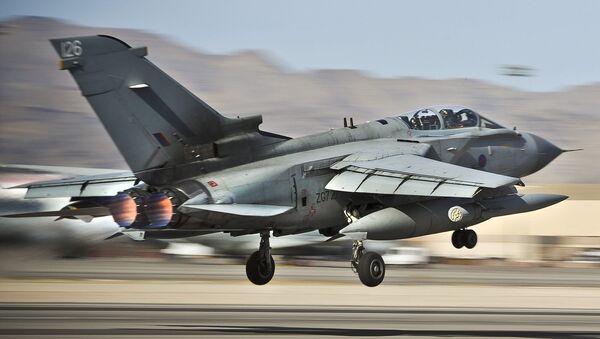 Britain looks set to join the anti-Daesh coalition in Syria within days after Prime Minister David Cameron announced a vote on the matter in parliament on Wednesday. Despite the PM's plan to bomb terrorist targets in Syria, experts have raised concerns over its legality.

Last week, Cameron took to parliament to set out his plans for the UK to extend their military action to target Daesh — also known as ISIL — sites in Syria.

Why we must take action against ISIL in Syria as part of a wider strategy. My Commons statement: https://t.co/ckyB427tHt

Throughout his pitch to MPs, Cameron based his legal justification for stepping up air raids on two factors — the collective self-defense of Iraq and the individual self-defense of the UK.

The PM also referred to the UN Security Council resolution 2249, adopted unanimously by the council on November 20, which calls upon states to take action against the jihadist group.

Despite these justifications, many legal experts have raised questions over whether these arguments cover the UK legally in the event of any potential military action on Daesh sites in Syria.

The resolution, drafted by France and passed in the wake of the Paris and Beirut terrorist attacks, has been used by many states to justify their involvement in the bombing of Daesh targets in Syria.

While the resolution refers to Daesh as a "global and unprecedented threat to international peace and security" and states that countries should take "all necessary measures", the resolution doesn't refer to Chapter VII of the UN charter, which is needed to provide legal authority for the use of force under international law.

Harriet Moynihan, associate fellow of International Law at the London-based think tank Chatham House, says that while it "provides political comfort" for politicians looking to extend against airstrikes into Syria, it is not a legally binding resolution for military intervention.

"The language used in the operative part of the resolution is merely hortatory ('calls upon') and does not refer to Chapter VII. For those who are looking for specific UN authorization for the use of force, this is not it," she said.

"It [the resolution] can be translated as saying that if a state has a legal basis, compatible with the UN Charter, to take military action, and if it has capacity to do so, then it is encouraged to act. The question therefore remains: does the UK have a legal basis for military action in Syria in the absence of specific authorization from the Security Council?"

Given that the UK, along with most of the international coalition against Daesh, hasn't sought permission from the Syrian government of Bashar al-Assad, many have claimed that the UK doesn't have a legal basis to carry out attacks on Daesh targets in the country.

The Question of Self-Defense

In his address to parliament, Cameron also based legal justification of airstrikes on collective and individual self-defense, with the collective self-defense of Iraq the "main basis" for the international coalition's actions in Iraq and neighboring Syria.

Given that officials in Baghdad have requested international governments to strike Daesh targets in neighboring Syria in order to protect Iraq's national security, many have used this as a legal justification for carrying out airstrikes.

Why all possible pressure must be put on MPs, particularly Labour MPs, to stop Cameron's rush to war @apdmurray https://t.co/MVoDcccR9k

However once again, some experts have raised concerns about how the legal bases of such attacks is unclear, given the lack of consultation with officials in Damascus.

MPs Quiz Cameron: Where Are the 'Magical' 70,000 Moderate Syrian Rebels?
On top of collective self-defense of Iraq, Cameron said that Daesh's campaign against the UK and its allies had reached the level of an "armed attack" against them.

The reference is to Article 51 of the UN Charter, which gives states the right to self-defense when an attack occurs.

To justify military action on the basis of self-defense, states must prove that the threatened attack is imminent and that self-defense is necessary and proportionate.

Furthermore, if the UK is to legally use self-defense as a reason to attack Daesh targets in Syria, it must be proved that the Syrian government forces are "unwilling or unable" to prevent attacks on foreign territories.

Despite the stated threat from many politicians that Daesh is planning to carry out an imminent attack on the UK, Moynihan says that this justification is questionable.

"In assessing the criterion of imminence, the temporal element is not conclusive; other relevant factors include the gravity of the attack, the capability of the attacker and the nature of the threat, including if it is likely to come without warning."

While the recent terrorist attacks attributed to Daesh have given some western states ammunition to push a legal case for intervention, Moynihan says that justification for an all out military offensive is still highly contentious.