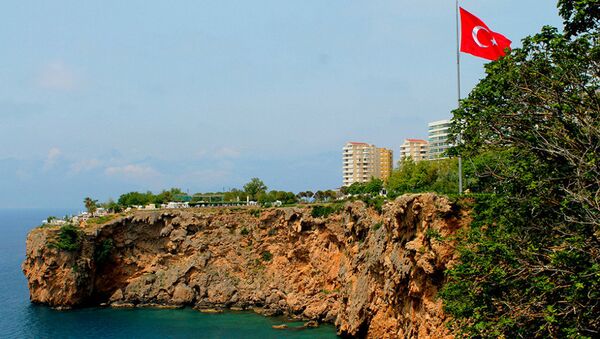 Turkey could lose up to 20 billion dollars annually, or about 3 percent of its GDP, due to Russian sanctions, according to Turkish MPs.

Cold Turkey: Russian Restrictions Contributing to Ankara's Economic 'Chill'
Legislators from the Turkish Republican People's Party (CHP) have warned that Russian sanctions may lead to Turkey losing up to 20 billion dollars annually, or around 3 percent of its GDP, the Turkish newspaper Hurryiet Daily News reported.

The newspaper quoted former Antalya Mayor and CHP MP Mustafa Akaydin as saying that the Mediterranean resort city stood to lose about 6.5 billion dollars in lost tourist revenues and that its agricultural sector could lose an additional 500 million dollars if Turkey and Russia didn't re-establish normal relations.

"Some 40,000 Russians live in Antalya and 200,000 Turks in Russia…The crisis between Turkey and Russia must be resolved as soon as possible," Akaydin said.

He also announced the closure of the wholesale fruit and vegetable market in the city of Gazipasa. He urged the state to deliver the oversupply to the poor, saying that the farmers in the region hope to continue to export produce to Russia through third parties and seek new markets.

Another CHP legislator, Cetin Osman Budak, who doubles as the head of Antalya's Chamber of Commerce and Industry, said in turn that the city has already lost about 25 percent of its tourism income, and that Ankara's current crisis with Moscow will negatively affect the whole of Turkey.

Russia Bans Tourism, Charter Flights to Turkey
On Saturday, Russian President Vladimir Putin signed a decree to boost national security and introduce economic measures against Turkey, in retaliation against the downing by a Turkish warplane of a Russian Su-24 bomber in Syria.

The measures include an end to visa-free travel to Russia for Turkish citizens after January 1, 2016 and the restriction of the activities of Turkish organizations in Russia, according to the Kremlin’s press service.

Moreover, Russian employers will no longer be allowed to hire Turkish citizens as of January 1, 2016.