Kerry, Lavrov to Hold Bilateral Meeting in Belgrade This Week 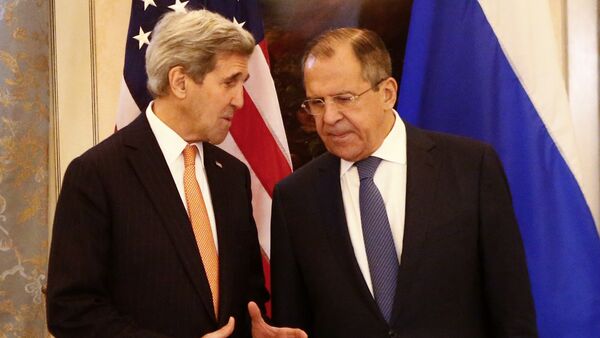 John Kerry and Sergei Lavrov are scheduled to have a meeting in Belgdade December 3-4, according to a US State Department official.

WASHINGTON (Sputnik) — US Secretary of State John Kerry and Russian Foreign Minister Sergei Lavrov will have a bilateral meeting on the sidelines of the Organization for Security and Co-operation in Europe (OSCE) ministerial scheduled to take place in Belgrade December 3-4, a senior US State Department official told reporters via teleconference on Tuesday.

US Secretary of State and Russian Foreign Minister will also discuss the recent talks with the Gulf nations as well as plans to work with the Syrian opposition at their bilateral meeting in Belgrade, a senior US State Department official told reporters via teleconference on Tuesday.

“I think the Secretary [Kerry] will want to update Foreign Minister Lavrov in person on the conversations he had with Gulf allies and partners on his most recent trip, the plans for the work with the Syrian opposition over the next week or two, and when and how we should have a follow-on meeting at ministers’ level in the Vienna process,” the official stated.