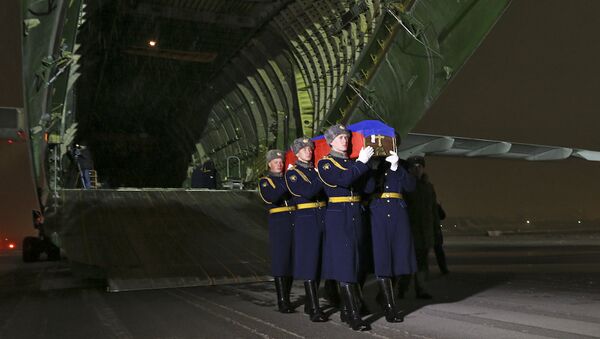 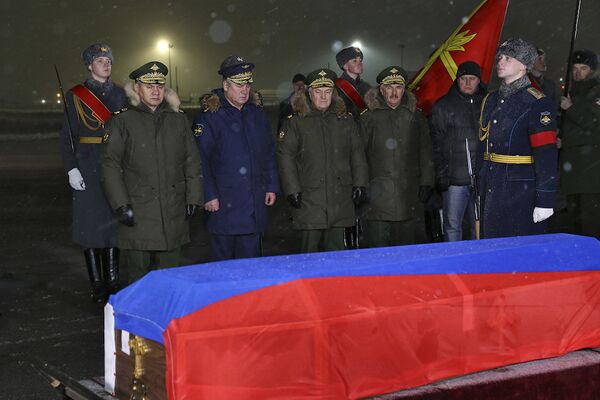 The body of the pilot of Russia's Su-24 bomber that was shot down by Turkey last week has arrived at the Chkalovsky Airport near Moscow
© Photo : Vadim Savitsky / Russian Defense Ministry
/
Go to the photo bank

According to the press service of the Russian Defense Ministry, the plane carrying the body was escorted by fighter jets during its flight.

#SYRIA #Bondarev: Treacherous shot in the back terminated the life of a good man and an excellent pilot

#SYRIA #Peshkov #Bondarev: Flight personnel have always been following his example. We will fulfill our military duty to the end

#SYRIA #Peshkov #Bondarev: Those who planned and executed this treacherous act will be punished

Plane With Body of Russian Su-24 Pilot Returns Home From Ankara
Peshkov, who was killed in action in Syria, was given full military honors by an honor guard company. The Hero of Russia will be buried in Lipetsk at the behest of his family members.

The pilot of the Su-24 bomber, Oleg Peshkov, was killed by ground fire while parachuting to safety after the warplane had been downed by an air-to-air missile launched by a Turkish F-16 jet over Syria on Tuesday.