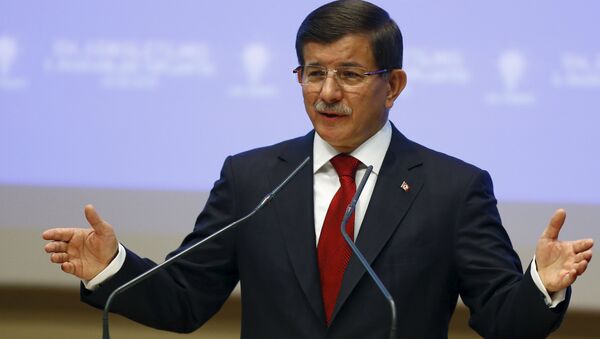 Neither Turkish prime minister nor president will apologize for the downing of Russia’s Su-24 bomber jet by a Turkish fighter in Syria, Turkish Prime Minister Ahmet Davutoglu said Monday.

BRUSSELS (Sputnik) – Ahmet Davutoglu warned that there will be no apology for downing Russian Su-24:

"No Turkish prime minister, or president or authority will apologize <…> because of doing our duty," Davutoglu said at a joint press conference with NATO Secretary General Jens Stoltenberg.

"We hope that Russia will reconsider these reactions, these measures, which will be against our interests both," Davutoglu said at a joint press conference with NATO Secretary General Jens Stoltenberg.

Erdogan Has ‘Every Reason to Be Sorry for Downing Russian Aircraft’
Turkish Prime Minister said that Russia is to blame for a new wave of Syrian refugees into Turkey.

“We have been telling our Russian friends that their bombardment against civilians on our border is creating new waves of refugees which do not go to Russia or another country, but are coming to Turkey,” Davutoglu said at a joint press conference with NATO Secretary General Jens Stoltenberg.

Turkey’s relations with Russia suffered a setback after its fighter shot down a Russian Su-24 Fencer over Syrian airspace on November 23. Ankara has so far refused to apologize for the incident.

The Russian Defense Ministry maintains no civilian casualties have occurred in its air campaign against terrorist targets, which dates back to September 30 following a request made by Syrian leadership.