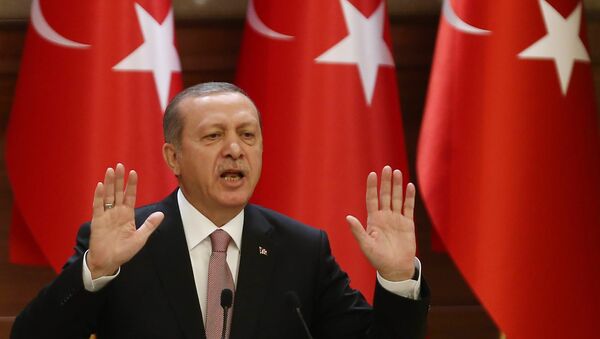 Reports are emerging that the Turkish president is now at odds with his army's joint chief of staff after remarking that Ankara did not know that the warplane was Russian when targeting it; “had the politicians kept quiet, we could have resolved the problem very fast,” the Turkish media quotes an informed military source as saying.

Erdogan's 'Silent Backers': Who Egged Turkish Leader to Attack Su-24?
The crisis that started by Turkey's shooting down of the Russian Su-24 bomber in the Syrian airspace has apparently led to a standoff between President Recep Tayyip Erdogan and the country's army, according to Turkish media reports.

The main reason for the discord was the comment of the Turkish president, which came in the aftermath of the attack, claiming that Ankara did not know the warplane was Russian when targeting it.

According to the Turkish-language daily, Sözcü, Erdogan and the Turkish army's joint chief of staff are now at odds over the attack and the following comments.

Turkey Arrests Generals for Stopping Syria-Bound Trucks 'Filled With Arms'
The Turkish paper quotes an informed military source as saying that Erdogan had taken a "hasty" position and declared that the army had been unable to identify the nationality of the plane in official remarks, "and this complicated the problem".

"Had the politicians kept quiet, we could have resolved the problem very fast," the newspaper quotes an unnamed military source as saying.

According to the source, the Turkish Air Force has warned its pilots to avoid any further violation of the Syrian airspace after Russia deployed its S-400 anti-aircraft missile system in Lattakia.