Berlin Not to Cooperate With Assad Forces Against Daesh 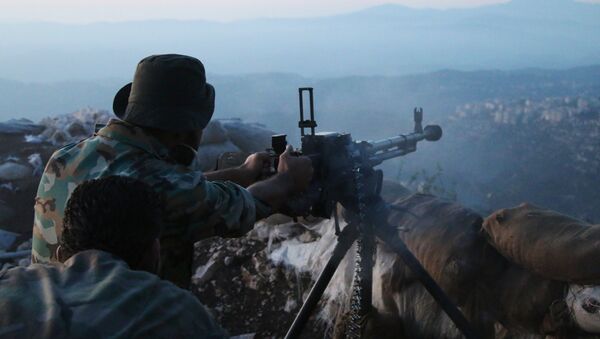 BERLIN (Sputnik) — The statement clarifies remarks made earlier on Monday by German Defense Minister Ursula von der Leyen. Cooperation with Syrian troops is possible provided a political transition in the country is underway, the minister told the public ZDF channel.

"There will be no collaboration with Assad and the military units under Assad's command," Flosdorff told journalists.

Von der Leyen has previously put the counter-terrorist effort in eliminating Daesh/ISIL as the top priority for Germany as well as for France, the United States, China, Russia, Turkey, Iran, and the Arab states. The minister on Sunday called on the international community to limit the militants' range of movement, destroy their infrastructure and undermine their oil trade, seen as the primary source of their finances.

The 16-page report, obtained by Der Spiegel, sets out the scope and cost of a German involvement in fighting the violent extremist group in Syria and Iraq as part of a wider US-led international operation.

According to the German outlet, the defense minister will announce the plan together with Foreign Minister Frank-Walter Steinmeier.

After it is waved through the cabinet, it is expected to be fast-tracked in parliament, and green-lighted for military deployment next year. The end of the mission is set for December 31, 2016.

The German mission will be the largest deployment of German forces abroad since World War II. It will involve between four and six Tornado reconnaissance jets, 1,200 personnel and cost approximately 134 million euros ($141.7 million).

The area of involvement is defined as the eastern Mediterranean, the Persian Gulf, the Red Sea, and "adjacent maritime territories." This indicates that France’s Charles de Gaulle aircraft carrier could operate in an area wider than previously expected, since German forces have pledged to support France in anti-Daesh operations.

Apart from France, Germany will cooperate with Iraq and members of the US-led coalition. Cooperation with Russia is being debated. Moscow has outlawed IS as a terrorist organization.