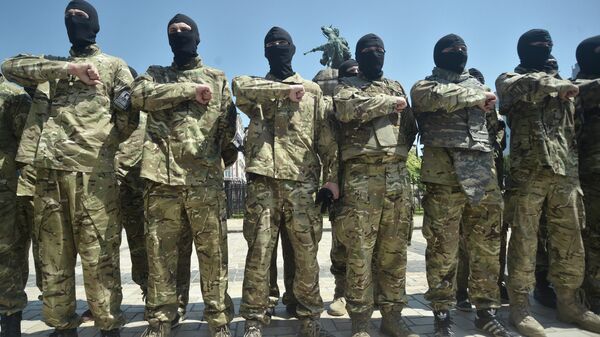 While Russia, France and other countries are trying to build an international anti-ISIL coalition, Ukraine’s Azov volunteer neo-Nazi battalion is eager to go down to Syria and fight against the Russian military, one of the leaders Andriy Biletsky told during a program on the TV Channel 112 Ukraina.

Who Is White-Washing Ukraine's Azov Battalion?
Biletsky, who is also a member of the Verkhovna Rada, was disappointed that not a whole a lot is going on in Ukraine right now due to the ceasefire. He said the Azov battalion could use opportunities in Syria to fight against the Russians.

The Azov leader said considering that the relations between Russia and Turkey dramatically deteriorated after the Turkish Air Force shot down a Russian plane in Syria, Turkey should seek Ukraine's support, as Ukraine would do if it were in Turkey's place.

In Biletsky's opinion, Ukraine would be glad to help out the Turkish government in a fight against Russia.

"I can say that Azov, for example, could send its international legion to fight for the Western coalition in Syria," Biletsky said while on 112 Ukraine.

There is so much wrong with these words. First of all, Russia isn't fighting against the Western coalition; on the contrary, Russia's trying to find common ground with the US-led Western anti-ISIL coalition. Moscow and Paris, for example, agreed to share their intelligence information on terrorists just a couple of days ago.

US Does Not Plan Russian Sanctions Relief for More Efforts Against ISIL
In other words, Russia is fighting only against ISIL, al-Nusra Front and other head-chopping jihadists who are threatening peace and stability not only in the Middle East, but across the whole world. And to fight against the Russian military in Syria effectively means siding with these terrorists. There is no other way around it, Mr. Biletsky.

Furthermore, ISIL is a Wahhabi jihadist extremist group who persecutes not only Christians, Kurds, Shiites and even other Sunni groups, whom they consider as "moderate." It's at the very least hard to imagine a brigade of pale-faced Ukrainian nationalists, some of whom identify as Christians, fighting on the side of ISIL. On the other hand, who knows what these radicals have in mind, because after all birds of a feather flock together, don't they?