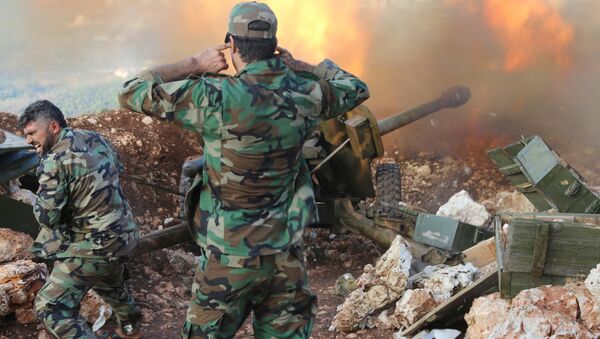 "Last night, there was intense mortar fire on Syrian government forces' positions fire from the Mount Jebel Aqra area, which is on the Turkish side," Brigadier General Ali Mayhoub said during a press briefing.

"Commander-in-chief of the Syrian Arab Army [President Bashar Assad] warns of the dangers of such behavior," the spokesman added.

ISIL on the Run: Syrian Army Closes in on Aleppo
Damascus urges the international community to force Turkey to stop supporting terrorists, directly and indirectly, as well as to stop buying illegal oil from them, he said.

"Taking advantage of the fact the border [between Syria and Turkey] is de-facto controlled by terrorists Ankara without obstruction supplies them with weapons and other resources for their criminal activity," the spokesperson told journalists.

"Commander-in-chief of the Syrian Arab Army warns of the dangers of such behavior and urges the international community to exert maximum pressure on the leadership of the Turkish Republic with the aim of forcing them to abandon the direct and indirect support for international terrorism," he stressed.

According to Mayhub, in exchange for military support, the Turkish leadership receives "from international criminals oil at bargain prices, cultural treasures looted by bandits in the museums of Syria and Iraq, and other contraband."

"Motor vehicles form Turkey can reach the areas seized by the terrorists without any control or checks while the Syrian authorities temporarily have no control over the border," the Syrian general said.

Turkey Supports Terrorism, Has Been 'Backstabbing Us for Years' - Syrian FM
"Humanitarian convoys which the Turkish government reported are a myth. It is used to help legalize supplies for terrorists and to successfully move wounded and ill militants to Turkish hospitals."

Moreover, the spokesperson said that "the border has become transparent due to the Turkish government. That also lets terrorists reach other European countries to commit numerous atrocities there."