Thousands Rally in London Against Cameron's Plan to Bomb Syria 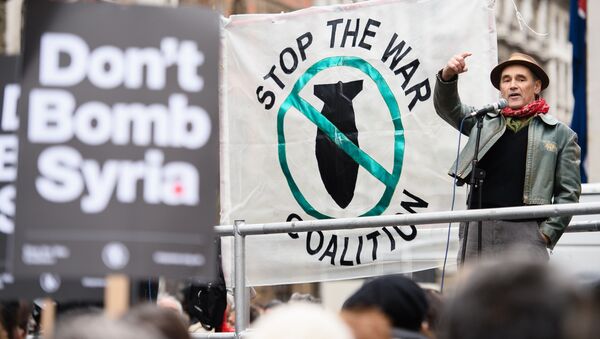 © AFP 2021 / LEON NEAL
Subscribe
Thousands of anti-war protesters gathered on Saturday outside the UK prime minister’s office in London for a rally against Britain’s possible military action in Syria.

LONDON (Sputnik) — The demonstration was organized by Stop the War Coalition, a pacifist movement that protested the 2003 Iraq bombings.

According to the pressure group, similar protests took place in over 30 cities and towns across the United Kingdom, including Manchester, Sheffield, and Leeds.

In London, people carrying placards that read "Don’t Bomb Syria" were seen demonstrating in front of 10 Downing Street, calling on members of parliament to vote against Prime Minister David Cameron’s plan to launch airstrikes on the Syrian soil.

'UK Airstrikes in Syria Risk Turning Europeans Into Extremists'
In an address to the London rally, Labour’s shadow internal development secretary Diane Abbott said, "I do not believe that bombing Syria will make it safe, any more than bombing Iraq made Iraq safe, bombing Afghanistan made Afghanistan safe and bombing Libya made Libya safe," as quoted by the national broadcaster BBC.

Wrapping up the event, protest organizer and politician activist Lindsey German said she was pleased with the turnout and promised another rally, should the parliament decide to vote on Syria action, according to the Guardian.

"We’ve got thousands of people here… and there are dozens of demonstrations going on around the country," German said. "We will be lobbying MPs and doing everything we can to try and stop this bombing."

On Thursday, Cameron set out the case for extending UK’s military campaign against the Islamic State extremist group in Iraq to Syria. But he needs to shore up support of lawmakers from the opposition Labour party before he can press for a vote in the House of Commons.

000000
Popular comments
"Don't bom Syria but the terrorists you created instead" a message for the us led coalition.