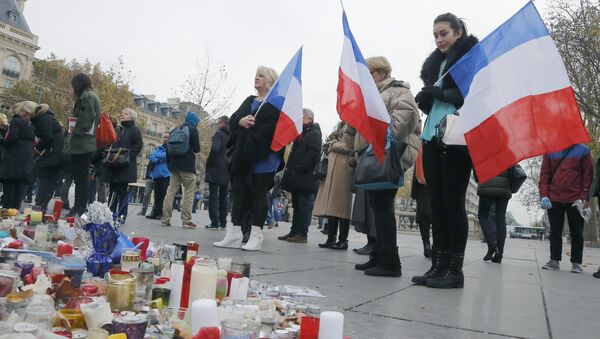 The French people mourned Friday the 130 shattered destinies of the victims of terror attacks that shook Paris on November 13, a day the nation will never forget.

Paris Attack Suspect Flees 'Toward Germany' After Escaping Brussels Raid
PARIS (Sputnik) — A series of suicide bombings and shooting attacks shook Paris on November 13. Several extremists launched coordinated attacks across the city, killing some 130 people and injuring over 360 at several locations, including restaurants, the Bataclan concert hall and in the vicinity of the Stade de France stadium. The Islamic State extremist militant group claimed responsibility for the attacks.

National ceremony commemorating victims of the attacks was held on Friday at the National Residence of the Invalids in Paris.

A formal ceremony was organized in the cour d'honneur of so-called Les Invalides in Paris. Over 2,000 people gathered on the podium for the honored guests: relatives and friends of the victims, French ministers, lawmakers, senators, former heads of state and members of the French government, diplomats and religious leaders. In the forefront, in wheelchairs and gurneys were people wounded in the attacks. Faces of many of those gathered were distorted by mental pain and anguish of loss. 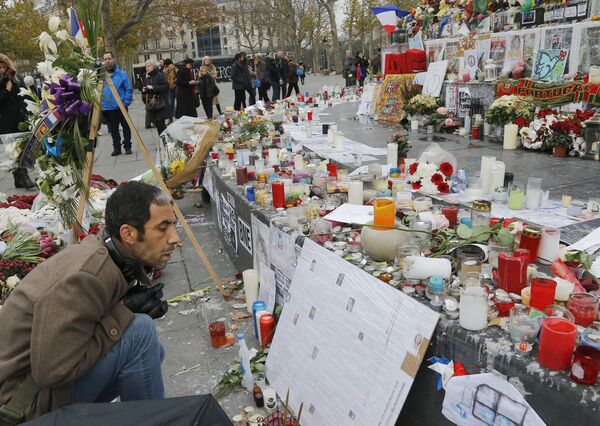 A man reads messages at the Place de la Republique in Paris, Friday, Nov. 27, 2015. A subdued France paid homage Friday to those killed two weeks ago in the attacks that gripped Paris in fear and mourning, honoring each of the 130 dead by name as the president pledged to “destroy the army of fanatics” who claimed so many young lives.
© AP Photo / Jacques Brinon

The tone of the ceremony was set by two French songs – Jacques Brel’s "Quand on n'a que l'amour" ("When there is only love") performed by Nolwenn Leroy, Yael Naim and Camelia Jordana, and Barbara Brel’s "Perlinpinpin" performed by opera singer Nataly Dessay.

"Against whom? Against what? Stop your violence," Dessay sang. While sad and melancholic, both songs at the same time called to maintain the taste to life and the will to live.

Several pieces were performed by a string orchestra of the Republican Guard of France. French cellist Edgar Moreau performed Suite for Cello by Johann Sebastian Bach.

A large screen broadcast pictures of victims of the terrorist attacks provided by relatives. In the deathly silence in the courtyard of Les Invalides the names and ages of 130 victims were called. Among them were people of different generations, but mostly young, not older than 35 years.

"Friday, November 13. The day that we will never forget. On this day, France got a vile hit in the heart," French President Francois Hollande began his speech.

According to Hollande, it was an act of war prepared abroad and performed in cold blood by a gang of murderers in the name of false aims.

"The nation is mourning the victims: 130 broken lives, 130 shattered destinies, 130 people, whose laughter we will never hear, 130 voices silenced forever," the president said. 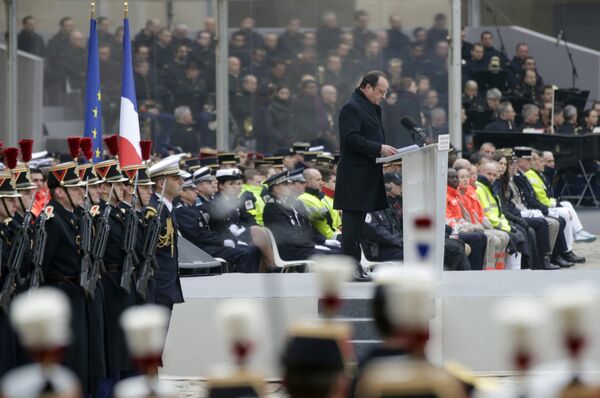 French President Francois Hollande delivers his speech during a ceremony to honor the 130 victims killed in the Nov. 13 attacks, in the courtyard of the Invalides in Paris, Friday, Nov. 27, 2015.
© AP Photo / Philippe Wojazer

Hollande said that these people were killed just because they were French, because they loved life, met with friends in restaurants and cafes or had fun at a concert in the Bataclan.

"It was the youth of France, the youth of a free country who loved culture and music. For terrorists, this music proved unbearable. They wanted to silence our joy with explosions. We will respond to them by greatly increasing the number of concerts and performances, we will continue to go to stadiums," the French leader said.

Hollande promised that the French authorities would do everything in their powers to find and punish those guilty of organizing terrorist acts to destroy the "army of fanatics" of the so-called Islamic State, which is behind these attacks.

"We will bring this fight to an end, and we will win," the president said.