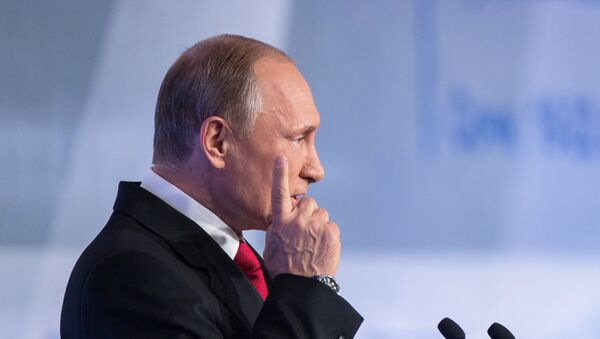 Russian president also noted that the talks were constructive.

#Putin and Hollande begin their press conference at the Kremlin after nearly three hours of talks. #Russia pic.twitter.com/NW5JnHXi2W

​On Situation in Turkey, SU-24 Downing

Russia has not previously placed S-400 anti-aircraft missile systems in Syria before, as no one expected that Russian aviation may be jeopardized there, said Russian President Vladimir Putin stated.

#Putin: We did not expect to be backstabbed by a country we considered our ally. #Russia #Turkey pic.twitter.com/tLVFpnyBnJ

​"The S-400 is a system of defense, and we did not have these systems there, in Syria, because we assumed that our aircraft operating at altitudes which cannot be reached by the criminal hand of terrorists, they do not have appropriate military equipment which is able to shoot down planes at an altitude of 3-4 thousand meters. "

Russian President Vladimir Putin dismissed Turkey's claims that it was impossible to recognize the downed warplane in Syria as a Russian attack aircraft before the attack.

"In regard to our planes that were allegedly unrecognizable — it is impossible, out of the question. They all bear identification signs that are clearly seen," Putin said at a joint news conference with French President Francois Hollande in Moscow.

In addition, Turkey as part of US-led coalition, was aware that Russian warplanes were carrying out combat missions in the area at that time, Putin stressed.

"It's all gibberish and lame excuses…but it's a choice made by the Turkish side," Putin said describing Turkey's official version of the circumstances surrounding the incident.

On Tuesday, a Russian Su-24 attack aircraft was downed by an air-to-air missile while carrying out precision strikes against terrorists in northern Syria. The missile was fired by a Turkish F-16 fighter in response to alleged violation of the Turkish airspace by the Russian jet.

Putin:Assad is "natural ally" in fight against terrorism, since Syrian army is on the ground and battle can't be won without ground troops

​Vladimir Putin also said that Russia will hold serious consultations with the US on the exchange of information on counter-terrorist in Syria after the tragedy with the Su-24.

#Putin: It is impossible not to be able to identify our airplanes. #Russia #Turkey pic.twitter.com/K5hkfcw977

​"The American side, which heads the coalition, which includes Turkey, knew the place and time of our aircraft in the air. And it the time we got hit. The question is why do we have shared this information with the Americans? Whether they do not control their allies or the information handed out left, right, and center, without understanding of the consequences."

Putin implies that before Turkey shot down the Sukhoi jet, Ankara received info from the US about when, where the aircraft would appear

Russia and France became targets of terror attacks conducted by ISIL militants, who claimed responsibility for both the explosion aboard a Russian A321 passenger airliner on October 31 and the November 13 deadly terror attacks in Paris.

"Those who use double standards against terrorists, using them to achieve their political goals, having business dealings with them, are playing with fire," Putin said at the end of his talks with French President Francois Hollande, Reuters reported.

According to the French President, France and Russia decided to share intelligence to fight ISIL militants.

Hollande said anti-ISIL airstrikes would become the subject of coordinated efforts to "enhance the efficiency of these actions," adding that Europe is mobilizing its efforts in the fight against terrorism.

#Putin: ISIS oil flows into #Turkey, while the militants use the money they earned for terrorist attacks in Europe and blowing up airplanes.

​"The United Kingdom will be involved in this, I spoke about this with [British Prime Minister David] Cameron and also discussed certain issues with [German Chancellor Angela] Merkel yesterday," he stressed.

Francois Hollande also noted that Russia plays one of the most important roles in the process of political peace settlement in Syria.

"Since 2011 the chaos that arose in Syria, has led to a huge wave of refugees, killing over 300 thousand, so now you need to find a political solution to the crisis. There are necessary conditions for this, which we must adhere to. It must be a coalition government, independent government during the transition period; this transitional period should lead to the adoption of a new constitution, the elections, to be attended by all political factions and groups, members of the diaspora "- Hollande said.

He added that the third condition is that "of course, "Assad should not play any role in the future of this country."

"We are talking about industrial-scale supplies of oil from the occupied Syrian territories seized by terrorists… And we can see from the air where these vehicles [carrying oil] are going to. They are going to Turkey day and night…We assume that the highest political leadership of Turkey knows nothing about this. It is hard to believe but theoretically it is possible."

The French president, in his turn, stated that the ISIL sources of financing should be damaged.

On A-321 Passenger Airliner Crash

"Personally, I once again told Mr. Putin that he can count on my support after the terrible terrorist attacks, that is an attack on the Russian airliner over the Sinai [Peninsula], which led to more than 220 victims," Hollande said.

In October, Islamic State claimed responsibility for the largest tragedy in Russian and Soviet civil aviation history when the Airbus A321 was downed with a homemade bomb with 224 people on board, all of whom died.

Hollande pledged his support to Russia in investigation and fight against the ISIL after the militants carried out a series of coordinated attacks at various locations in Paris, killing some 130 and injuring over 360 people on November 13.

French President Francois Hollande also said he had agreed to exchange information with Russian President Vladimir Putin on the situation in eastern Ukraine.

"We also agreed with Mr. Putin that we would exchange information on other important issues [including] in what is happening in eastern Ukraine," Hollande said. "We will continue to work in the Normandy Quartet format."

The French leader underscored the need to "fully implement all the measures" detailed in the Minsk ceasefire agreement.