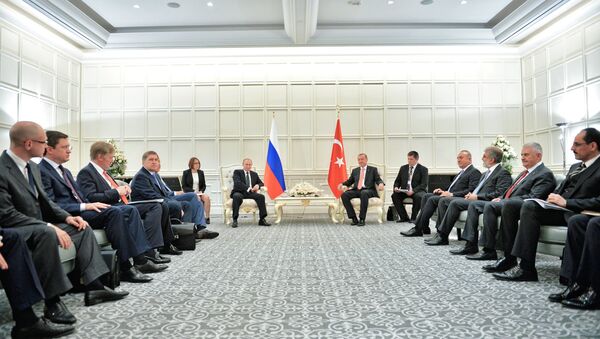 © Sputnik / Alexei Druzhinin
/
Go to the photo bank
Subscribe
The harsh response of Russia in the incident involving the Su-24 jet that was downed by Turkish air forces could be counterproductive for both states, analysts claimed.

Turkey to Cooperate With Russia on Downed Su-24 - Turkish PM
The conflict between Russia and Turkey caused by the downing of the Russian Su-24 jet doesn’t’ serve the interests of Turkey itself, but can play into the hands of other major political players like the US and the UK, and a harsh response to the crisis from Moscow to the incident could be counter-productive for Russia, some experts are claiming.

On Tuesday, a Russian Su-24 jet crashed in Syria. Russian president Vladimir Putin said that the plane was downed by an air-to-air missile from a Turkish F-16 aircraft over the Syrian territory about 4 kilometers (2.5 miles) from the border with Turkey. The Russian leader called the incident a “stab in the back” from terrorists’ accomplices. Though the jet’s pilot was killed, the air navigator was rescued after the attack. He is located at a military base in Syria.

“Despite the fact that Russia suffered that attack – the actual objective of this operation was Turkey, in my point of view,” Center for Political Information Director General Alexei Mukhin claimed during the MIA Rossia Segodnya’s round table.

'Obama Needs to Reconsider Blanket Support for Turkey’s Acts'
The political analyst suggested that the forces behind it could arrange the incident to make mischief between Russia and Turkey. “The bounds between the two countries have strengthened lately, trade and economic turnover should have increased in perspective, investing activity of Russia in Turkey has grown, and all appearances that the genuine reason of this operation with provocative subtext was to diminish the construction that has been shaped,” Mukhin said.

“It seems to me that he [Turkish president Erdogan] was used to create this dangerous — for Turkey first of all – situation, because it resulted in an increase of Russian’s military presence in the region and, in fact, the taking of the control of this situation in full. Moreover, Russia has got the moral right to act more decisively in the future,” he pointed out.

The political analyst continued by saying that “there is a range of interests behind the provocation” of such powers as the UK and the US. “The main beneficiaries of this process will be Anglo-Saxon powers who are not interested in the strengthened Erdogan, as they need a more obedient Turkey in the framework of NATO,” he added.

In this situation Russia has to “act much more wisely,” because if “unfairly placing all the blame on Turkey and showing aggression” would mean for Moscow that the organizers of the provocation act succeeded.

US Refuses to Disclose Information on Who Fired at Su-24 Pilot From Ground
Russia can talk about revision of some points of its relations with Turkey, but should keep the bilateral partnership, Mukhin suggested.
“We will talk from strengthened positions with our urkish partners, I am stressing – partners, because there won’t be gas discounts anymore, and we will reconsider some of the agreements in our own benefit, as Turkey is in the weak position now,” he stressed.

Petr Stegniy, a member of the Russian Council on international affairs and former Russian ambassador to Turkey, takes a similar point of view saying “I don’t have a rational explanation on what has happened.”

“This neither serves Turkish interests, nor those of NATO, nor those  of the international coalition.”

‘Turkey Openly Supports ISIL, Desires to Rebuild Empire’
Stegniy stressed that Turkey cannot be forgiven for an incident that has gone “beyond all the limits of intergovernmental communications and betrayed all the traditions of Russo-Turkish relations, cooperation that was designed as a stabilizing factor of regional security.” He also added that the attack against a Russian jet is also a “stab in the back of positive experience in relation with Turkey, that was accumulated and was crucial for Russia in the 2000s.”

At the same time, the expert believes that a balanced choice of counter-measures from Russia is needed in this case.

“As a matter of my forty years’ experience in diplomacy, I’d recommend to take a brief pause. As a person, who has spent many years in Turkey — for many years has dealt with Middle East issues — I have to say that there haven’t been any illusions on how far could our cooperation with Turkey actually go. But if to start ruining under the influence of emotions what has been built in last years, it would mean self-harm.”

The expert concluded by saying that “the cutting of military ties with Turkey is an absolutely motivated and imminent step,” and welcomed the decision to deploy Russian air defense system S-400.

“This would make us control the situation in full, preventing of rowdiness from any of sides in any shape.”