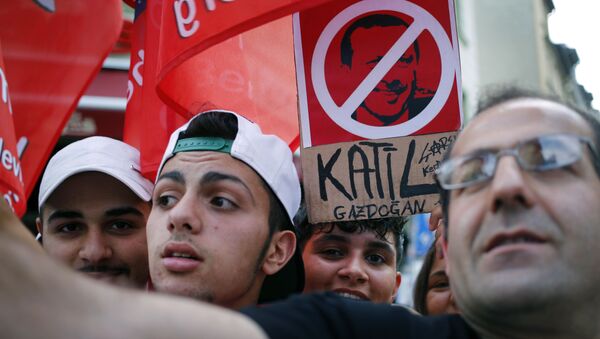 © AFP 2021 / DAVID GANNON
Subscribe
As expected, the F-16 attack on a Russian Su-24 bomber over Syria has become a hot topic for discussion on Turkish social media. Taking a peak at both the Turkish and English-language corners of the Twitterverse, Sputnik discovered that not only are many Turks upset over the incident, some are downright outraged over their government's actions.

With the Turkish Air Force attack on the Russian plane in Syria instantly provoking a swelling response of debate and condolences from both Russian and foreign social media users, Turkish social media users naturally joined in. But in a surprising twist, many offered apologies to their northern neighbor, emphasizing that it is the Recep Erdogan government, not the Turkish people, who should be blamed for the attack.

Some users appealed directly to their Russian friends, using the Russian-language hashtag #StabInTheBack.

#УдарВСпину As a Turk I apologize for Turkish gov. action today for shooting down the #Russia 's fighter jet, a lot of Turks on your side

​Others responded elsewhere, in other forms, one user even appealing to the Russian prime minister. Many emphasized that they were "ashamed" over their government's actions, placing the blame squarely on the Erdogan government.

#IStandWithRussia as a Turkish citizen, sorry for the brave pilots who were fighting against #ISIS terrorism.

@MedvedevRussiaE Sorry from a Turkish citizen..

@russian_market İ am a Turk and truly sorry and ashamed about what was happened today.I even cried for the pilot.May he rest in peace.

As a Turkish man I feel ashamed about my countrys situation right now. #Russia #Turkey

@zerohedge I am Turkish and I am ashamed to see our "sultan" deciding to shoot down a Russian jet trying to destroy "rebels"! I am sorry!

@PutinRF_Eng i am Turkish but i support Putin, so are many friends of me, but %65 of Turks believe in Erdogan and his islamic aims:(

Others still took a wider view of the situation, suggesting, as a few experts have also done, that Erdogan may not have acted alone:

i am turk yes we just did given from NATO mission.We dont have stand-alone control. https://t.co/N3tPTOLuyl #Russia pic.twitter.com/0RYkBvmUYk

On English-language Twitter, a debate broke out over the Turkish government's charge, publicized by WikiLeaks, that the Russian plane had flown into Turkish airspace, and their claim that the military had warned the plane ten times over five minutes to change their trajectory.

The same debate broke out on Turkish Twitter, with Sputnik picking up on one such exchange, involving Meydan Gazete journalist Turgay Ogur:

"Some details have been made available," Ogur writes. "The plane was approaching the Turkish border, and was warned ten times over the course of five minutes. Our airspace was violated for 17 seconds."

With Ogur admitting that "of course he would have been in Damascus" by then, Demir Ok noted that what she can't "understand how a plane which had violated our airspace for only 17 seconds could have been warned over the space of five minutes?"

Posting the famous images supposedly showing the plane's flight trajectory, a user named Ibrahim Kalin commented that "the data from radar observations of the movement of the downed plane clearly show that, despite warnings, it had violated our airspace."

Responding to Kalin, and the images, a user named hakaneren sarcastically asked: "And American planes, tanks, convoys aren't violating our border? Tomorrow the Russians will up and shut off our gas supplies; then you'll have your violation."

Others took another tack, focusing their criticism on what they felt was the "erratic" and "dangerous" foreign policy approach of the Erdogan government.

"What I got out of Erdogan's speech: the Russian plane was shot down not because it had violated our airspace, but because Russia has struck the Turkmen." (a group of Turkish-trained rebels fighting in Syria against Damascus)

"The foreign policy of the AKP in brief: 1. The downing of the plane shows that the country can be dragged into any war. 2. The Turkmen are a marvelous pretext for supporting the jihadists."

"I believe we are faced, in terms of both domestic and foreign policy, with the most dangerous authorities in the country's history, because it is impossible to predict what they might do next."

Ultimately, this outpouring of support from many Turks for Russia and the Russian pilots is an important reminder that whatever mistakes a government might commit, the offended side should never make the mistake of conflating a nation with its wayward leaders.

000000
Popular comments
This restores may faith in the Turkish people if nothing else. This proves as far as I'm concerned that the Turkish Government is only concerned with serving Washington's interests rather than those of the Turkish people.
Randall Lee Hilburn
25 November 2015, 20:36 GMT6
000000
I am a Turk, sorry for your brave pilot and soldier who were fighting against evil global attackers(terrorists and their western masters ). I wanna warn all Russian experts about this evil strategy. This planned atack is one of the surrounding strategy. The first step Sinai attack(Egypt Region retreat), second step is downing Russian warplane(Turkey region retreat). You must be so carefull for next step. You should take some solid counter-measures about this process. This is a long term strategy. I think you will find the key roleplayer soon. Please be careful, sorry for inconsiderate stupid AKP government. They obey the orders from their masters. Best Regards to Mr.Putin and his followers,sad Russian friends.
muratse4000
25 November 2015, 22:02 GMT4
000000
Newsfeed
0
New firstOld first
loader
LIVE
Заголовок открываемого материала
Access to the chat has been blocked for violating the rules . You will be able to participate again through:∞. If you do not agree with the blocking, please use the feedback form
The discussion is closed. You can participate in the discussion within 24 hours after the publication of the article.
To participate in the discussion
log in or register
loader
Chats
Заголовок открываемого материала
Worldwide
InternationalEnglishEnglishMundoEspañolSpanish
Europe
DeutschlandDeutschGermanFranceFrançaisFrenchΕλλάδαΕλληνικάGreekItaliaItalianoItalianČeská republikaČeštinaCzechPolskaPolskiPolishСрбиjаСрпскиSerbianLatvijaLatviešuLatvianLietuvaLietuviųLithuanianMoldovaMoldoveneascăMoldavianБеларусьБеларускiBelarusian
Transcaucasia
ԱրմենիաՀայերենArmenianАҧсныАҧсышәалаAbkhazХуссар ИрыстонИронауОssetianსაქართველოქართულიGeorgianAzərbaycanАzərbaycancaAzerbaijani
Middle East
Sputnik عربيArabicArabicTürkiyeTürkçeTurkishSputnik ایرانPersianPersianSputnik افغانستانDariDari
Central Asia
ҚазақстанҚазақ тіліKazakhКыргызстанКыргызчаKyrgyzOʻzbekistonЎзбекчаUzbekТоҷикистонТоҷикӣTajik
East & Southeast Asia
Việt NamTiếng ViệtVietnamese日本日本語Japanese俄罗斯卫星通讯社中文（简体）Chinese (simplified)俄罗斯卫星通讯社中文（繁体）Chinese (traditional)
South America
BrasilPortuguêsPortuguese
NewsfeedBreaking
03:00 GMTWreckage of Disappeared An-26 Plane Found in Russia's Khabarovsk Territory - Source
02:20 GMTLavrov Holds 1st Meeting With Truss in New York Amid New UK Accusations Under Skripal Case
01:49 GMTDHS Looks to Staff Gitmo Migrant Facility With Guards Who Speak Haitian Creole Amid US Border Surge
01:30 GMTRussian Crew Leaves Boat Pilgrim in Alaska, Will Renew World Trip Next Spring - Captain
01:00 GMTWall Street Up Broadly as Fed Signals Caution With US Stimulus Taper, Rate Hike
00:45 GMT‘This Moment Demands Action’: Biden Eyes Executive Actions After Fruitless Police Reform Talks
00:26 GMTMoroccan Liberal Parties Form Coalition Government, Ousting Islamists After Decade of Rule
00:00 GMTIAEA Must Have Access to Nuclear Fuel for Australian Submarines - Iranian Envoy
YesterdayFDA Authorizes Pfizer Booster Shots for Elderly, At-Risk Americans
YesterdayTurkey Should Withdraw From Syria, End Occupation of Territories - Syrian Foreign Minister
YesterdayPentagon Says Aware of Reports of Poor Conditions at Military Base Housing Afghans
YesterdayUK Announces Plans to Become AI Innovation Superpower Within 10 Years
YesterdayUS Man Pleads Not Guilty to Capitol Bomb Threat After Livestreaming Police Standoff
YesterdayCroatian Police Partially Solve Mystery of Lone Woman Found on Island With No Memory
Yesterday‘Earth Looks Fragile from Space:’ Jeff Bezos Pledges $1 Billion to Tackle Climate Crisis
Yesterday‘World’s Coolest Dictator’: El Salvador’s Bukele Changes Branding on Twitter Amid Protests
YesterdayCzech, Hungarian Prime Ministers Slam EU for Poor Border Protection From Illegal Migrants
Yesterday‘We’re Done With Fear’: Florida Appoints Joseph Ladapo as State’s New Surgeon General
Yesterday'Difficult Decision': Facebook Chief Technology Officer to Step Down From Post
YesterdayGrandmothers Know Best: Cristiano Ronaldo’s Mother Believes Her Grandson is a Star in the Making