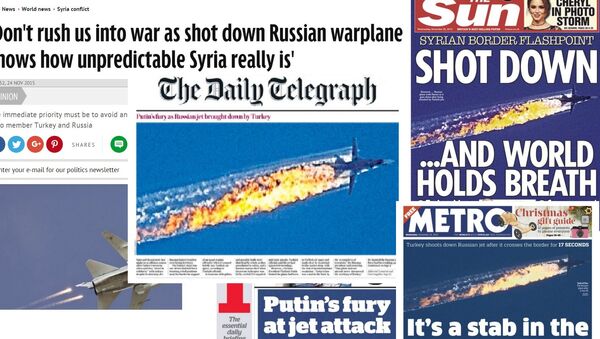 With the eyes of the world focused on the situation surrounding the Turkish shoot down of a Russian Su-24 bomber over Syria, experts suggest that the reaction of both the Western media and leaders suggests that they are fully aware just how reckless and dangers Turkey's actions are.

Wednesday's analysis in major Western newspapers warned that the Turkish Air Force attack on the Russian Su-24 in Syria may lead to a further deterioration of relations between Russia and NATO, already at historic lows, with commentators suggesting that the alliance could now be drawn into a new crisis in the Middle East, and that the situation threatens the fragile diplomatic effort to resolve the crisis in Syria, at the precise moment when agreement seemed more and more probable.

The incident was met with dismay from many Western politicians, who promptly called for restraint and calm following the incident, while nonetheless emphasizing that they "stand behind" their Turkish allies. This included NATO Secretary General Jens Stoltenberg, who said following an emergency meeting of the NATO Council that "what we are calling for now is calm and de-escalation," and measures to ensure "transparency, predictability and various means to reduce risks."

NATO Fears Possible Consequences if Su-24 Incident Remains Unsettled
Asked for comment, Middle East expert Mikhail Roshchin told Sputnik that many in the West understand perfectly well that the shoot down of the Su-24 was not an accident, offering a sobering warning of the very real dangers of conflicting interests over Syria leading to escalation.

A senior researcher at the Institute of Oriental Studies of the Russian Academy of Sciences, Roshchin noted that "the incident with our aircraft has sobered up many in the West. This was particularly obvious when looking at the articles in the newspapers. Everybody understands perfectly well that this was not an accident. Moreover, it happened precisely at the moment when hopes for a rapprochement" between Russia and the West on Syria "were beginning to take shape."

On the whole, the analyst noted, "the reaction to the situation has been very diverse. But it is clear that to many people in the West, there is an understanding that Turkey made a very dangerous move, one which undermines all the efforts of the past weeks, where people from different sides attempted to come up with a plan to coordinate the [common] war against ISIL. And, in my opinion, this incident was aimed precisely at undermining all these efforts."

According to the analyst, the situation with the plane could slow down the creation of a unified coalition against ISIL, but will not be able to stop the process completely.

Roshchin noted that "President Hollande of France had taken a very active role in this area, travelling to Washington with the goal of persuading the Americans to take a firmer position. The incident could slow down the creation of the coalition. Still, it seems to me that the French are very interested now in moving forward, and provocative actions should not affect France's determination. The French know perfectly well, especially after the recent terror attacks in Paris, that ISIL will not stop."

Canada, NATO Partners Must Prevent Escalation of Russia-Turkey Tensions
Kani Xulam, the director of the American Kurdish Information Network, agreed with the Russian expert, telling Sputnik that he was confident that Turkey shot down the Russian plane deliberately, in order to interrupt the process aimed at resolving the bloody five-year-old war in Syria.

According to the journalist, "the Vienna talks may have triggered [the attack] A truce with President Assad is not what Erdogan wants in Syria." Instead, Xulam suggested, the Turkish leader would prefer that Assad's government be toppled, with rebel groups financed by Turkey stepping in to fill the resultant power vacuum.