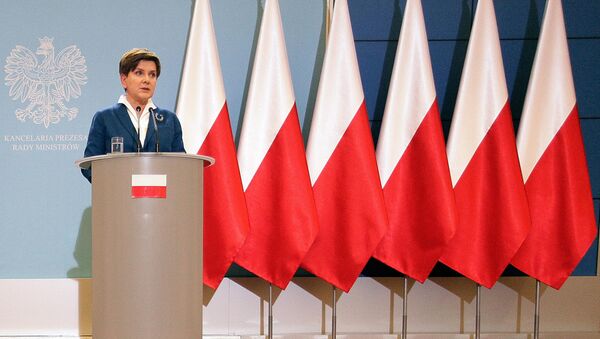 The new Polish Government, under Prime Minister Beata Szydlo, has removed all EU flags from official meetings and photo calls and replaced them with the Polish flag, in a clear sign of a change of policy over its membership of the EU.

Although the governing Law and Justice Party is pro-EU, there are growing calls for more powers to be repatriated from Brussels to Warsaw. Ten years ago, when the party was last in power, it did its utmost to hold up the Lisbon Treaty and EU officials fear a similar reticence to toe the line will now follow.

(Tweet above says: "Did someone ask about EU flags?")

At a press conference Tuesday, journalists noticed that the EU flag, which usually stood opposite the Polish flag, had been replaced with the country's red and white colors. When asked about it, Szydlo said:

"We're an active EU member… but we adopted the approach that statements after government meetings will take place against a backdrop of the most beautiful… white-and-red flags."

"We're going to pursue a policy that, while appreciating our EU membership, secures maximum benefit for our Polish citizens, for Poland's economy and for our homeland," she added, surrounded by a dozen large Polish flags.

Now that #Poland is getting rid of #EU flags & we in #UK are being charged for bags in shops, here's a winning idea pic.twitter.com/wdYQT0J6Mg

Officials in Brussels — aware of the two years the Law and Justice Party was last in power — is bracing itself for a difficult relationship with Warsaw. It could become a real problem for Brussels for two more reasons.

The UK is set to hold an In/Out referendum on its membership of the European Union by the end of 2017 — although it is likely to be in 2016. Prime Minister David Cameron is calling for Britain's membership to be re-negotiated and for some powers to be repatriated back to London, as well as for fundamental change to the Brussels machine.

In this, he is joined by Szydlo, although there is a sticking point over access to in-work benefits in the UK, with Cameron calling for a delay in EU citizens being able to claim them, but Poland arguing against it.

The second problems for Brussels is that Poland is not the only country to have turned Eurosceptic. Even in the Netherlands, 83 percent of Dutch voters want more influence over future transfers of power to the EU and 61 percent of the population want a referendum on any further enlargement of the EU.

Many countries have seen a rise in Euroscepticism, spurred on by the way people have seen Greece bullied into submission over the euro and the refugee crisis caused by a dysfunctional system of border security brought about by the Schengen Agreement.

As Brussels struggles to cope with the crises it is already handling, Poland's decision to drop the EU flag at ceremonial occasions will be the least of its troubles.