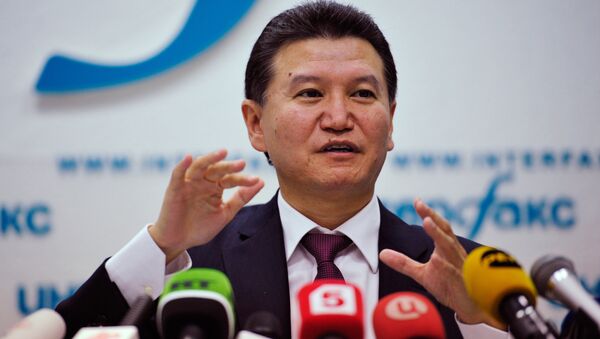 © Sputnik / Ramil Sitdikov
/
Go to the photo bank
Subscribe
The former president of the Russian Republic of Kalmykia Kirsan Ilyumzhinov was designated by the US Department of the Treasury for materially assisting and acting for or on behalf of the government of Syria, according to press release.

WASHINGTON (Sputnik) — The United States has imposed sanctions on the former president of the Russian Republic of Kalmykia Kirsan Ilyumzhinov because of his alleged assistance to the government of Syria, the US Department of the Treasury said in a press release on Wednesday.

“Kirsan Ilyumzhinov was designated today for materially assisting and acting for or on behalf of the government of Syria, Central Bank of Syria, Adib Mayaleh and Batoul Rida,” the press release stated.

In addition, the Treasury Department designated the Russian Financial Alliance Bank, which is controlled by Ilyumzhinov and chaired by Mudalal Khuri, also sanctioned by the United States over assistance to the Syrian government.

The Treasury Department noted that all US assets of the designated individuals and entities are frozen, and US citizens are prohibited from engaging in transactions with them.

Ilyumzhinov is also known for being a long-time president of the World Chess Federation.

000000
Popular comments
The US and NATO are all playing the same game with a variety of different methods.