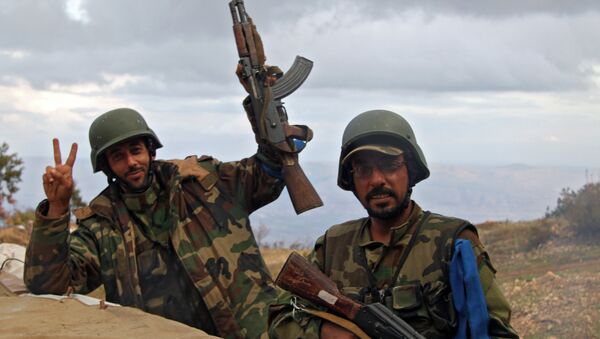 Syrian government forces, backed by the Russian air strikes, have reportedly managed to regain control over another 12 kilometers of the Aleppo-Latakia highway and are currently advancing on the town of al-Salma.

Russia, Iran to Join Efforts for Syrian Settlement - Putin
Syrian troops continue to advance on the town of al-Salma after taking back another 12 kilometers along the Aleppo-Latakia highway, according to the Iranian news agency FARS.

On Monday, the Syrian Army and the National Defense Forces (NDF) also earned control over a key height in the northeastern countryside of Latakia in fighting that left dozens of ISIL terrorists killed or wounded.

The military sources said that most of the terrorists killed in the fighting have been identified as Afghans.

#SYRIA #FOOTAGE Elimination of terrorists' base in Deir ez-Zor province by strike of Tu-22M3 https://t.co/WLqtYlrDlE pic.twitter.com/JPcJZhubTg

The sources also said that in the past ten days, the Syrian Army, supported by Russian warplanes, has forced the militant groups to retreat from large areas of land in the coastal province of Latakia.

During a military operation carried out by government forces and backed by the Russian bombardments, the army pushed the militants back from almost 200 square kilometers of territory in Latakia province.

The militants suffered heavy losses in the 10-day operation as the Syrian army and the NDF purged the terrorists and advanced to areas located near the Turkish borders.

According to the sources, the Syrian forces managed to take control of the Zahia heights in Latakia, 2 kilometers from the country's border with Turkey, on Monday.

Why Syria’s Assad Will Likely Outlast Barack Obama in Office
Earlier that day, the Russian upper house of parliament unanimously supported the request of President Vladimir Putin to deploy units of the Russian Aerospace Forces abroad.