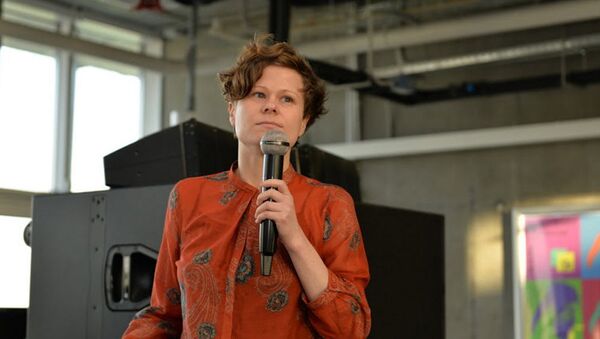 © Blogger photo
Subscribe
Phil Butler
All materials
Research scientist, Tatiana Podladchikova has been awarded the prestigious International Alexander Chizhevsky medal for her work in the field of space weather.

Dr. Podladchikova, who has worked at Skoltech Space Research Center since its foundation back in 2013, was presented with the coveted award in a ceremony at the 12th European Space Weather Week in Ostend, Belgium. The award, presented to young researchers who make significant contributions to space weather research, was presented to the scientist for her developing highly advanced forecasting via filtering what had been virtually indecipherable data.

The work of professor Podladchikova deals with new theories of estimation derived from extracting useful signals from extremely noisy experimental data via a new Kalman filter, and via data assimilation via observations of the electron radiation belts. The doctor’s work facilitates real-time reconstruction of the dynamics of Earth’s radiation belts to that space weather effects can be forecast. Through the accurate forecasting of solar activity and geomagnetic storms, and via the reconstruction of Earth’s magnetosphere, such things as predicting moving object trajectories can be more accurately modeled.

This award comes in the wake of Dr. Podladchikova’s post doctoral work in so-called “space weather” research. In 2014 she was involved in a joint project in between Skoltech, UCLA and MIT, aimed at solving this predictability problem. Basically, the research last year was about protecting sensitive instruments from bombardment from high energy particles from the Sun. Apparently, the natural progression of this work led to an unprecedented capability to predict the evolution of the radiation belt. This capability then showed promise for predicting even weather forecasts and ocean dynamics.

Skolkovo Institute of Science and Technology (Skoltech) is a private graduate research university at Sklokovo, Russia. Established back in 2011 in collaboration with MIT, Skoltech educates international scientists and innovators in order to help usher in technologies that address humankind's most pressing problems and potential. Instructors at Skolkovo, and students, apply internationally significant research models, with the assistance of 21st century entrepreneurship.

000000
Popular comments
Check out her faculty page. This is some smart woman. Cosmonaut material?

David Sheremetev
28 November 2015, 01:51 GMT
000000
I am impressed by the work Ms. Podladchikova does and more impressed that she has offered more science into the relationship between the Sun and our climate. "This capability then showed promise for predicting even weather forecasts and ocean dynamics."