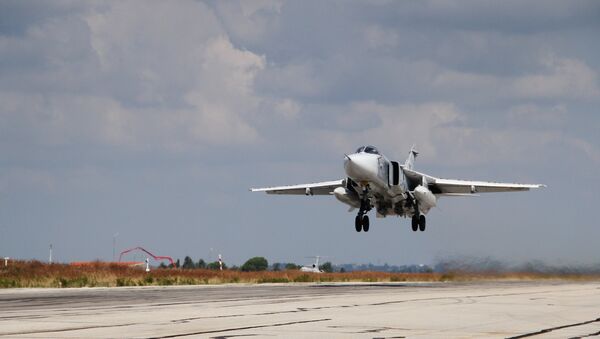 Shooting down Russia's Su-24M bomber jet while in Syrian airspace is an aggressive act that is being regarded as an act of war under international law, legal expert Alexander Mercouris told Radio Sputnik on Tuesday.

​"If the aircraft was in Syrian airspace, then in international legal terms it is an act of war, because Turkey would have invaded Syrian airspace, and shot down an aircraft within Syria, that was operating with the consent of the Syrian government," Mercouris told Radio Sputnik.

"That would be a most aggressive step," said Mercouris.

World
Kremlin Has No Official Information on Fate of Downed Su-24 Pilots
Turkey's actions in summoning the Russian ambassador and initiating a NATO meeting, rather than getting in touch with Moscow, are part of the government's strategy to bolster its position, in the knowledge that the plane was shot down in Syrian airspace, not Turkish, as the Turkish authorities are claiming.

"This is in effect the Turks diving for cover," said the legal expert.

World
Turkey 'Crazy' to Down Russian Su-24 Jet - Italy’s Lega Nord Party Leader
"It's a reflection of the pressure the Turkish government is coming under because they are seeing their policy in Syria beginning to unravel."

Though Turkey can expect ritual expressions of public support from NATO allies, concerns will be expressed behind the scenes about Turkey's increasingly aggressive stance.

"There is already concern about Mr Erdogan, about his policies, in many countries, and I think this will reinforce them."