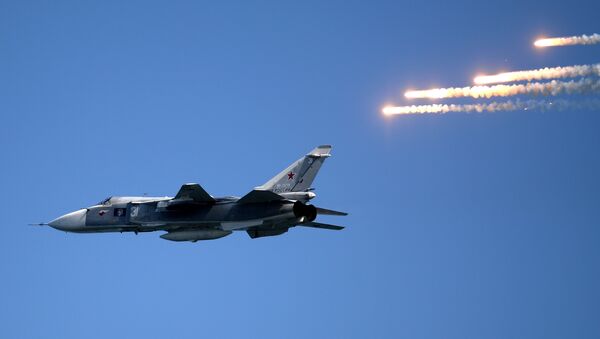 © Sputnik / Konstantin Chalabov
/
Go to the photo bank
Subscribe
Turkey’s new Energy and Natural Resources Minister Berat Albayrak on Tuesday ruled out that the downing of a Russian Su-24 bomber jet close to the Turkish border could end energy relations between the two countries.

ANKARA (Sputnik) — On Tuesday, a Russian Su-24 came down in Syria, 2.5 miles away from the Turkish border after it was hit with an air-to-air missile launched from a Turkish F-16 jet, according to Russian President Vladimir Putin.

"In a heat of the moment, without all information, it would be wrong to make unguarded statements," Albayrak said. "We have close friendly cultural and economic relations with Russia not only in the energy sphere, but also across other economic sectors. I am not pessimistic about our energy relations," he said.

Turkey gets more than a half of its natural gas supplies from Russia. Speaking at his swear-in ceremony in Ankara, Albayrak assured the Turkish people that they should not fear the coming winter.

Following the plane’s downing, President Putin said the Turkish attack was a "stab in the back," carried out by "accomplices of terrorists." Russia has been conducting a military operation in Syria since September to roll back Islamic State insurgency.

Moscow and Ankara have been working together for over a year to build a joint gas pipeline from Russia under the Black Sea to Turkey and further on to Greece, which would make Turkey a key transport country for Europe.

000000
Popular comments
Oh wow, this is bizar. You punch someone in he face and don't expect him to hit you back???
Jets
25 November 2015, 03:30 GMT1
000000
I think that President Putin and Energy Minister Alexander Novak have more of a say in this regards that this Turkish Terrorist.