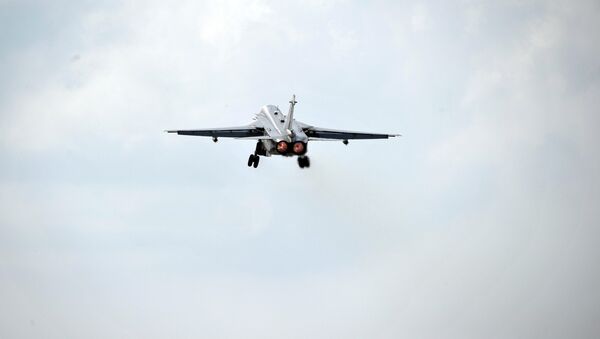 © Sputnik / Dmitriy Vinogradov
/
Go to the photo bank
Subscribe
The Turkish government’s official explanation for shooting down a Russian Su-24 bomber was that it had violated Turkish airspace. But Ankara’s timeline of the events is already raising questions.

In the wake of the downing of a Russian bomber along the Turkey-Syria border on Tuesday, many were demanding answers. In a letter to the United Nations Security Council, the Turkish ambassador gave his government’s view of the incident.

"This morning (24 November) 2 SU-24 planes, the nationality of which are unknown have approached Turkish national airspace in Yayladagi/Hatay region. The planes in question have been warned 10 times during a period of 5 minutes via 'Emergency' channel and asked to change their headings south immediately," the letter, obtained by Wikileaks, reads.

But many social media users have begun crunching those numbers and found that they don’t quite add up.

When calculating the distance flown and the amount of time allegedly spent in Turkish airspace, some have attempted to determine the aircraft’s flight speed. According to those numbers, the Su-24 would have had to be flying at stall speed.

Earlier on Tuesday, the Russian Ministry of Defense also released video proving that the incident did not happen the way the Turkish government claims. Flight path data of the Su-24 shows that it never entered Turkish airspace, and was attacked while flying over Syria.

The bomber was shot down by two Turkish F-16s Tuesday morning. One of the pilots has been confirmed dead by Russian authorities, shot by rebel ground units after ejecting.