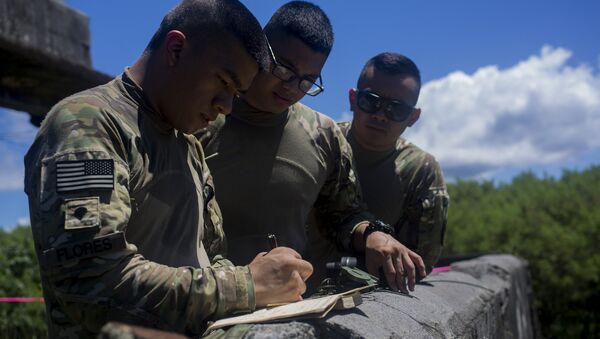 CC BY-SA 2.0 / Naval Surface Warriors / 140918-M-MP631-158
Subscribe
Residents of Guam and the Mariana Islands are enraged by US plans to send 4,800 Marines there in the nearest future to conduct military drills close to the scene of East Asia conflicts.

The islands would be a perfect choice for carrying out military exercises due to their location. Not only they are a sovereign American territory — which means the US wouldn't have to worry about partnership abrogation — they are the US lands closest in proximity to Japan. One of the duties of Guam Marines would be to respond to natural disasters in Japan, and Tokyo is covering more than a third of the expenses in construction of the training grounds.

US, China Conduct 'Unplanned Encounters' Joint Naval Drills
The choice may be obvious for a Defense Department that has been struggling to locate permanent base options for the Marines, but for islanders, in particular the residents of neighboring Pagan and Tinian, the answer isn't so clear.

China reportedly has plans to build three multimillion-dollar casinos on Tinian, which is home to around 3,000 residents, and many are concerned that an increased military presence anywhere close to the territory may hinder investments in the tourism-casino industry.

Meanwhile, Pegan accepted much of Guam's population back in the 1980s following a series of volcano eruptions; for three decades these people have been dreaming of returning to the place where they were born.

"If they station 2,000 Marines on it and blast the hell out of it, what we're talking about is the destruction of the place," noted Michael Hadfield, professor emeritus at the University of Hawaii. "If they do it, it's gone."

The group We Are Guahan worked with Yost to persuade the Pentagon to scale down its original plan to send some 8,600 troops — along with their families — to Guam, a population influx that would overwhelm a territory with just 160,000 residents.

But the group doesn't consider the battle won, and plans to take the fight even further.

"Having a place to fire cannons and practice obviously is essential, but this just isn't the right place," Yost said.

Currently, more than a quarter of Guam's territory is controlled by the US military. If new training facilities are added, three of the fifteen islands in the Commonwealth of the Northern Mariana Islands will be used primarily for military purposes.

000000
Popular comments
Can someone tell me why is the Usa is so hell bent to start a War, one they or us western called allies that follow them like lap dogs,will never win and more important dont want, Leave China and Russia,alone stop trying to put your own puppet governments in power, sorry about the length of this, but some of us are sick of this shit,usa stop get rid of Obama you know he is fucked in the head and believe it or not i live America but not the War mongers tgat are in power.,
budgie102
25 November 2015, 02:52 GMT2
000000
Why are they provoking war even more this way?