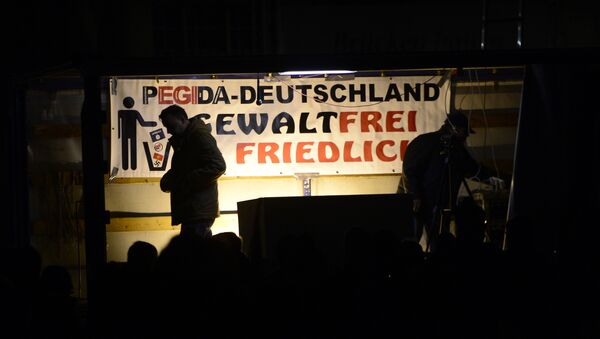 © AP Photo / Jens Meyer
Subscribe
Another journalist has been assaulted by far right group Pegida during a recent anti-Islam demonstration in Eastern Germany. The movement's Monday evening meetups have been marred by violence and appear to be spreading. In October, 20,000 people gathered for an anniversary rally in Dresden where several journalists were attacked.

The authorities in Dresden no longer monitor the number of people who turn up for Pegida rallies, but it is thought the recent demonstration at the Theaterplatz was attended by up to 5,500 supporters. It was here that a journalist had to be taken to hospital after being attacked. Three people were arrested and are being investigated for causing bodily harm.

It was believed that support for the Pegida movement which stands for Patriotic Europeans Against the Islamization of the West, had dwindled after the departure of its leader Lutz Backman. But according to German newspaper Der Spiegel, the far right group is back "and is becoming more radical," fueled by the ongoing refugee crisis gripping Europe. Demonstrators recently marched through Dresden shouting "deport, deport" against refugees.

Deutsche Welle journalist Jaafar Abdul Karim and his colleague were pushed and shoved as they were surrounded by protesters at the rally in Dresden, who began shouting: "Go away, lying journalists! What do you want?"

Jaafar Abdul Karim was hit in the back of his head.

After Karim was attacked by the group, he wrote an open letter to Angela Merkel saying:

"Lots of people are freaked out over all this migration, but integrating people into German society really isn't all that hard."

Tommy Robinson, a name synonymous in the UK with the far right extremist group, English Defense League (EDL), recently addressed a crown of Pegida supporters in Germany on the first anniversary of the anti-migrant party, saying Angela Merkel was "handing out the birthright of German citizens like she is handing out candy."

During the demonstration, Ruptly cameraman Jose Sequeira was attacked and beaten to the ground. He said:

"Neo-Nazis attacked me from behind. They grabbed my camera and stamped on it on the street then started punching me."

It's since emerged that the far right rhetoric is spreading from Dresden to the UK. The group plans to hold a demonstration in the UK in January — with Tommy Robinson — a far cry from the former leader, who opted out of EDL in October 2013 in favor of a more peaceful approach and dialogue with British Muslims, taking part. 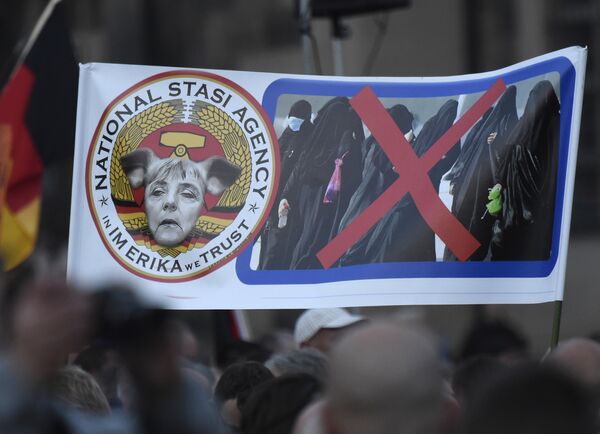 In a press release produced two years ago by anti-extremism think-tank the Quilliam Foundation, Tommy Robinson said: "I have been considering this move for a long time because I recognize that, though street demonstrations have brought us to this point, they are no longer productive. I acknowledge the dangers of far-right extremism and the ongoing need to counter Islamist ideology not with violence but better, democratic ideas."

Quilliam stated: "We hope to help Tommy invest his energy and commitment in countering extremist of all kinds, supporting the efforts to bring along his former followers and encouraging his critique of Islamism as well as his concern with far-right extremists… and also call on Islamist extremist leaders to follow this example and leave their respected groups."

Under Fire in Germany: Attacks on Refugees Double
Quilliam Chairman and co-founder Maajid Nawaz said at the time: "As well as being a very positive change for the United Kingdom, this is a very proud moment for Quilliam.

This represents not a change but a continuation for us, as challenging extremism of all kinds forms the basis of our work. We have been able to show that Britain stands together against extremism regardless of political view."

000000
Popular comments
how can they exist

nadezhdochka_25
26 November 2015, 09:42 GMT1
000000
Newsfeed
0
New firstOld first
loader
LIVE
Заголовок открываемого материала
Access to the chat has been blocked for violating the rules . You will be able to participate again through:∞. If you do not agree with the blocking, please use the feedback form
The discussion is closed. You can participate in the discussion within 24 hours after the publication of the article.
To participate in the discussion
log in or register
loader
Chats
Заголовок открываемого материала
Worldwide
InternationalEnglishEnglishMundoEspañolSpanish
Europe
DeutschlandDeutschGermanFranceFrançaisFrenchΕλλάδαΕλληνικάGreekItaliaItalianoItalianČeská republikaČeštinaCzechPolskaPolskiPolishСрбиjаСрпскиSerbianLatvijaLatviešuLatvianLietuvaLietuviųLithuanianMoldovaMoldoveneascăMoldavianБеларусьБеларускiBelarusian
Transcaucasia
ԱրմենիաՀայերենArmenianАҧсныАҧсышәалаAbkhazХуссар ИрыстонИронауОssetianსაქართველოქართულიGeorgianAzərbaycanАzərbaycancaAzerbaijani
Middle East
Sputnik عربيArabicArabicTürkiyeTürkçeTurkishSputnik ایرانPersianPersianSputnik افغانستانDariDari
Central Asia
ҚазақстанҚазақ тіліKazakhКыргызстанКыргызчаKyrgyzOʻzbekistonЎзбекчаUzbekТоҷикистонТоҷикӣTajik
East & Southeast Asia
Việt NamTiếng ViệtVietnamese日本日本語Japanese俄罗斯卫星通讯社中文（简体）Chinese (simplified)俄罗斯卫星通讯社中文（繁体）Chinese (traditional)
South America
BrasilPortuguêsPortuguese
NewsfeedBreaking
13:45 GMT'Three Civilians Killed in US Airdrop Operation' in Syria's Deir ez-Zor
13:21 GMTIraq Arrests Activists, Ministry Employee for Calls to Normalise Ties With Israel
13:20 GMTMali to Explore New Security Partnerships As France Ends Sahel Operation
13:18 GMTMerkel's Potential Successor Laschet Reveals His Vote Preference in Election Blunder
13:11 GMTWomen to Dominate Iceland's Parliament for First Time Ever, Reports Suggest
13:09 GMTBlast Kills Taliban Intelligence Officer in Eastern Afghanistan, Source Says
13:00 GMTGermans Head to Polls to Choose New Bundestag
12:51 GMTDozens of New Yorkers Stage Anti-Vaccine Protest at a Food Court Chanting F**k Joe Biden
12:41 GMTFour Inmates Dead, One Injured in Attempted Jailbreak in Philippines, Reports Suggest
12:40 GMTVirginia Giuffre to Reportedly Hand Prince Andrew Secret Doc Able to Defeat Her Lawsuit
12:37 GMTRussia Scrambles Three Su-35 Jets to Escort US B-52 Bomber Approaching Border in Pacific Ocean
12:32 GMTCyclone Gulab Likely to Make Landfall in India on Sunday Evening
12:21 GMTUN Chief Warns 'Humanity Unacceptably Close to Nuclear Annihilation'
12:09 GMTKremlin Says It Hopes for Consistency on Minsk Agreements From Germany After Merkel Leaves
12:02 GMTRussian Presidential Spokesman Says Gazprom Fulfilling All Obligations
11:54 GMTLabour Leader Says It's 'Not Right' to Say Only Women Have a Cervix
11:43 GMT'F**k Them': Carlson Responds to Yet Another Call to Fire Him Over 'Great Replacement' Theory
11:42 GMT'Piece of Scum': UK Labour Deputy Leader Lashes Out at Tories
11:14 GMTUK Transport Minister Calls on Britons to Behave Normally, Says There is No Shortage of Fuel
11:12 GMTHamas Has No Place in Sudan But Will It Give Up on Former 'Base'?