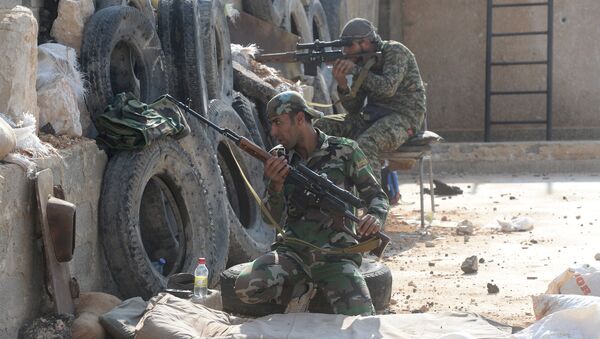 Syria Enlists Volunteers in Struggle Against ISIL
The Syrian army and allied forces have carried out extensive military operations against terrorists across Syria, the Iranian Fars news agency reported on Monday.

The Syrian army and NDF Forces stormed a number of terrorist positions in dozens of villages in and around Aleppo, northern Syria, on Sunday.

"Gathering centers of the ISIL Takfiri terrorists in the surroundings of al-Nairab Camp, and another ten regions, came under large-scale operations of the pro-government forces, who not only killed scores of the terrorists but also destroyed their military hardware," reported Fars.

"In the meantime, the Syrian army accompanied by Hezbollah and the National Defense Force surrounded a strategic area in Aleppo, killing several terrorists and destroying their vehicles and arms, including anti-aircraft machine guns." 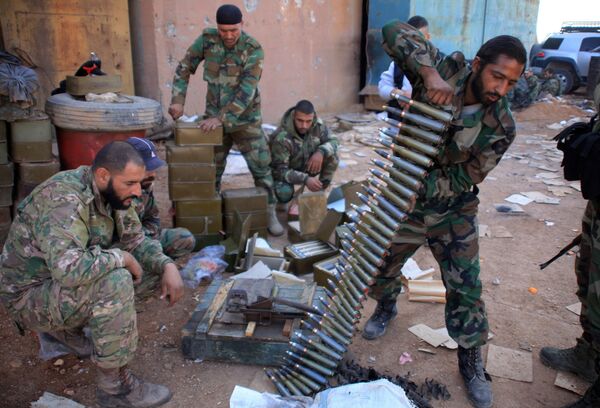 Syrian pro-government forces prepare their weapons at a train station in the area of Arkile near the airport of Kweyris, in the northern Syrian province of Aleppo, on November 20, 2015
© AFP 2023 / GEORGE OURFALIAN
Successful anti-terror operations were also carried out in the regions of Homs, Dara'a, Idlib, Hama and Damascus.

Gatecrashers: Russian Helicopters, Syrian Troops Poised to Retake Palmyra
Ahrar al-Sham terrorists also sustained heavy casualties in Hama, as did Jeish al-Islam and al-Nusra in Damascus, where they were forced to retreat from a number of buildings after the Syrian Army stormed their bases.

In Idlib, Ahrar al-Sham militants, including a commander, were killed when the vehicle they were traveling in was destroyed. At least 20 Jeish al-Fath militants were also killed in anti-terror operations in the province, and six al-Nusra terrorists were killed when their command centers and vehicles were destroyed.