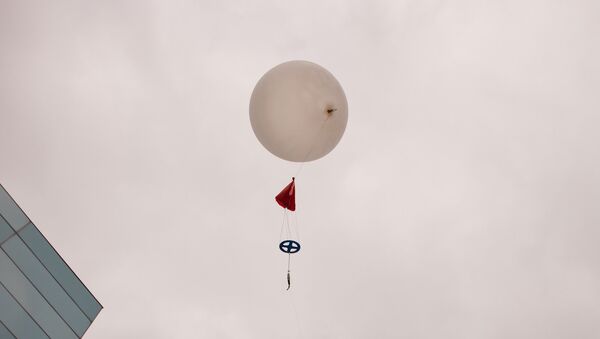 © Flickr / COD Newsroom
Subscribe
International
India
Africa
Weather balloons typically pop once they reach a particular altitude, and the instruments they carry parachute uneventfully to the ground. But not this time.

Ad Astra: Great Life of a Small Balloon
The National Weather Service had no clue what a fuss its weather balloon would prompt in the wake of a mounting global terrorist threat; they likely didn't expect this particular balloon's ability to fly hundreds off course either.

Police reported to a Northeast Philadelphia neighborhood Saturday night after witness reported a mysterious object had fallen from the sky and crashed down onto a parked car. A bomb squad arrived promptly after the call, but they found nothing but a white object attached to a small parachute, which turned out to be a weather balloon.

The instrument — called a radiosonde — had been carried skyward by a balloon to measure temperature, pressure and humidity and transmit data to weather forecast centers.  They're launched daily from nearly 100 stations in US states and territories; this one was reportedly from the National Weather Service in Sterling, Virginia, according to the Washington Post — 165 miles from where it caused such a ruckus in Philly.

According to some reports, it could have been strong winds that steered the balloon so far off course.

"The great majority land uneventfully," said Chris Strong, warning coordination meteorologist for the D.C. NWS office. "But once in a great while you hear about something like this."

"Several years ago," Strong commented, "two landed on the White House grounds within a few days of one another. They go up and come down, and occasionally in a place where we'll hear about it."

According to the NWS, around 70,000 weather balloons are launched every year.