Turkey May Protect Turkmen in Syria If Threat Emerges 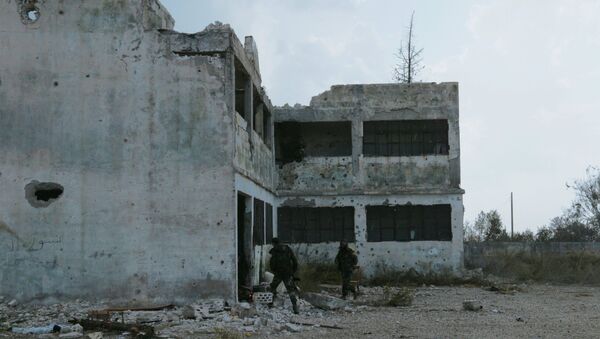 Turkey is ready to protect Turkmen in Syria and prevent a possible sharp influx of refugees from the war-torn country, the Turkish Prime Minister said Sunday.

ANKARA (Sputnik) — On November 20, the Turkish Ministry of Foreign Affairs issued a note of protest to Russian Ambassador Andrey Karlov over Russian anti-terrorist airstrikes in Syria. The note, obtained by RIA Novosti, cites an alleged Russian Aerospace Forces strike on a Syrian Turkmen settlement near the Syrian-Turkish border.

"If the attacks leading to an intense influx of refugees to Turkey continue, necessary measures will be taken both in Syria and in Turkey. We will take all the required diplomatic steps to protect our brothers and sisters where they are and to protect our interests in the face of any threat," Ahmet Davutoglu told journalists regarding the situation with the Turkmen village.

He did not specify what those measures would be.

ISIL Militant Admits to Buying Arms in Ukraine, Sending to Syria Via Turkey
According to Davutoglu, Islamic State militants are not operating in the area. The prime minister said that he was in contact with Chief of General Staff Gen. Hulusi Akar and National Intelligence Organization (MİT) head Hakan Fidan.

Russian military aircraft have been conducting precision strikes against the IS forces in Syria since September 30 at the behest of Syrian President Bashar Assad. Since the beginning of the airborne campaign Russian aircraft have carried out over 2,000 sorties, destroying some 3,000 terrorist targets and killing hundreds of extremists.

After a series of Western claims that Russia is conducting airstrikes against civilians in Syria, since fully denied by Moscow, Deputy Defense Minister Anatoly Antonov invited military attaches from NATO states and Saudi Arabia to justify these allegations with proofs.