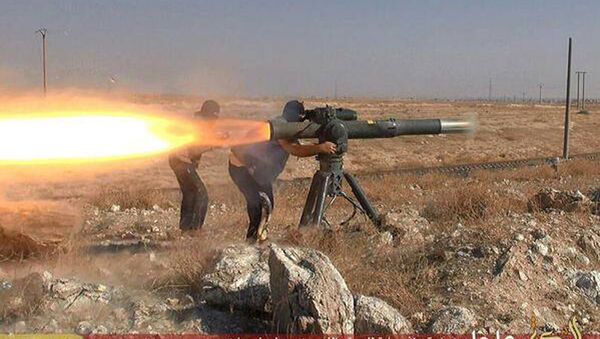 The Al-Nusra Front, Al-Qaeda's affiliate in Syria, has released a grateful video, where they openly thank the Free Syrian Army (FSA), which the US has touted as a “moderate opposition group”, for supplying them with US-made anti-tank TOW missiles (“Tube-launched, Optically tracked, Wire-guided").

A recently released video shows an Al-Nusra Front field commander thanking the FSA commanders for giving his forces TOW missiles, according to a report released by the Iranian news agency FARS.

CENTCOM Denies US-Trained Syrian Rebels Defected to Al-Nusra
The agency reminds readers that the two groups, the Al-Nusra and the FSA, formed an alliance in March, the Army of Conquest, or Jaish al-Fatah in Arabic, to fight against the forces of President Assad.

Since then, they have fought together “at almost every single battle in Aleppo, Lattakia, Hama, and Idlib Governorates of Syria.”

Through this alliance several militant groups like the Al-Nusra Front and the Ahrar al-Sham movement have been given access to FSA's US-made heavy weaponry, which has been supplied to the militant group by the US, Saudi Arabia and Qatar.

Qatar Tries to 'Mainstream' Al-Nusra Front to Topple Syria’s Assad
The US, however, claims that it is just supplying aid and weapons to FSA or the so-called moderate militant groups in Syria.

The BGM-71 TOW is one of the most widely-used guided anti-tank missiles. The weapon is used in anti-armor, anti-bunker, anti-fortification and anti-amphibious landing roles.

TOW missiles are used by the armed forces of more than 40 countries and are integrated in over 15,000 ground, vehicle and helicopter platforms worldwide.