New Threats Call For New NATO, This Time With Russia On Board

© AFP 2023 / JOHN THYS
Subscribe
International
India
Africa
The security threats of the 21st century, such as ISIL, require a new defense alliance, similar to NATO, which will be capable of meeting the new challenges. The new group should include Russia and “wealthy and powerful Muslim nations, who can no longer sit on the sidelines,” according to democratic presidential candidate Senator Bernie Sanders.

“We must create an organization like NATO to confront the security threats of the 21st century — an organization that emphasizes cooperation and collaboration to defeat the rise of violent extremism and importantly to address the root causes underlying these brutal acts,” the senator of Vermont said this week during a speech at Georgetown University in Washington, D.C. 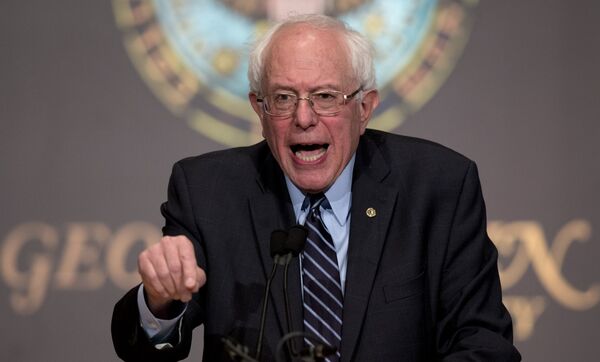 The politician also added that the new defense group should both include America’s NATO partners and expand to include Russia and members of the Arab League.

Referring to the history of NATO, Sanders noted that it started at the doorstep of the Cold War and eventually became a major alliance against the then-Soviet Union.

Accepting Russia into NATO, or creating a new defense group altogether, would “rearrange one of the world’s most powerful bonds by uniting the former rival countries around ISIL as the modern enemy,” he was quoted as saying by the US-based political website The Hill.

My Enemy's Enemy is My Enemy: NATO Aimed Trident at Terrorists and Russia
Speaking about ISIL, the senator appeared to be highly critical of the Muslim nations of the region, specifically Saudi Arabia, Kuwait, Qatar and the United Arab Emirates, which he believes “have contributed far too little in the fight against ISIL.”

“He bashed Saudi Arabia, with the third largest defense budget in the world, for devoting more resources to the fight against Iranian-backed Shia Muslims in Yemen than ISIL. And he criticized Qatar for spending a reported $200 billion on the 2022 FIFA World Cup, “yet very little to fight against ISIL” and for not being “vigilant in stemming the flow of terrorist funding,” reads the website.

“All of this has got to change,” he said. “Wealthy and powerful Muslim nations in the region can no longer sit on the sidelines and expect the United States to do their work for them.”

The politician reiterated that defeating ISIL must be the priority for “nations all over the world who share a common interest in protecting themselves against international terrorists.”

The address came just hours after Democratic front-runner Hillary Clinton called for “an intensification and an acceleration” of the American policy against ISIL.