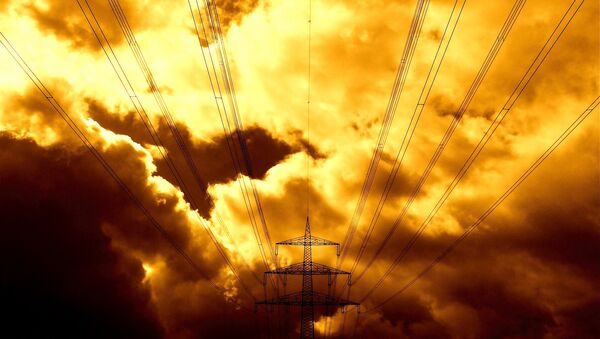 On Saturday, Ukrainian police said that power lines in southern Ukraine supplying the Crimean peninsula with electricity were blown up by activists from the group which launched the unsuccessful, Kiev-sanctioned 'food blockade' of the peninsula in September. Sputnik brings you up to speed on the energy blockade and its potential consequences.

World
Power Transmission Towers 'Blown Up' Causing Blackout in Crimea
On Friday night, two of the four electricity transmission lines in the southern Ukrainian region of Kherson supplying power to Crimea were destroyed, with the remaining two blown up on Saturday night. As a result, beginning Saturday, 1.9 million of the peninsula's 2.3 million residents were left without power, with authorities introducing a state of emergency.

Over 100 brigades armed with over 500 diesel generators have been dispatched to ensure the provision of power to socially important facilities, with authorities setting up an emergency schedule for the supply of electricity and water to areas hit by the outage.

Energy-saving measures include shutting off street lights and limiting the operation of entertainment venues until 10 o'clock at night. Schools and businesses will also be closed Monday to save on electricity, a statement published on the Crimean government's website reads.

Officials from Ukraine's state energy company Ukrenergo initially announced that they would try to repair the lines within 3-4 days. However, repair crews arriving to repair the lines have since been met by activists attempting to prevent them from carrying out their work. Ukrenergo press secretary Zinovy Butso told 112 Ukraina TV channel that the activists would not allow the workers to get down to work "in the coming days."

The 'activists', believed to be from the same group which unsuccessfully sought to create a food blockade of the peninsula in September, appear to have shifted tactics, and are now looking to prevent the resumption of energy deliveries to the peninsula.

Ukraine's Ministry of Internal Affairs has since opened four criminal cases in connection with the destruction of the power lines, a police spokesman in the Kherson Region explaining that the charges include one count of a deliberate attempt to damage power facilities, two of causing bodily harm to the police, and a fourth count for deliberately obstructing the work of local journalists.

Tweet showing a screenshot of a Facebook post by the 'Civil Blockade of Crimea' group, featuring a downed powerline in Kherson. Underneith is a Crimean Tatar flag. Tatar Mejlis leaders, who claim to represent the peninsula's Tatar community, have been criticized recently for cooperating with Ukrainian extremist groups including the notorious Right Sector in their ridiculous attempts to blockade Crimea's food supplies.

Ukrainian news media, reporting that "the blockade of Crimea has begun to work in full force: the peninsula has been left completely without power."

Officials from Ukrenergo had earlier told reporters that a single 330 kW line could be restored in one day, capable of delivering 500-550 megawatts to the peninsula, thus ensuring a minimum level of power. A second line, according to the company, could be restored within 2-4 days. Now things appear to depend on the protesters blocking engineers from fixing the lines.

Some Ukrainian social media 'couch warriors' couldn't contain their pleasure over the so-called energy blockade's effects, this user noting that "'In 'Russian' #Crimea without Ukrainian electricity, even the railroad crossing barriers at the crossing on the road to Kerch do not open."

Ukrenergo emphasized that the downing of the lines to Crimea have affected the supply of power to Ukraine's own southern regions, including Kherson and Mykolaiv. The situation is apparently so bad, Ukrenergo Deputy Director General Yuri Kasich said Sunday, that the shutdown of just one more element at the Kakhovskaya substation could have a "cascade effect," leaving up to half of the Kherson and Mykolaiv regions without power.

"I want to emphasize that the unified energy system of Ukraine is constructed in such a way that it is impossible to separate individual areas, regions or localities, and that, accordingly, any failure in the energy network, in the west or the east, can be connected," affecting the rest of the system, Kasich noted, speaking to reporters.

Speaking to reporters on the consequences of Kiev's apparent inability to keep its power transmission lines linked to Crimea secure, Prime Minister Sergei Aksyonov noted that if Ukrainian energy companies really "believe that they do not need our market, they will lose it forever, the same as happened with food," RIA Novosti reports.

The prime minister emphasized that the present situation has only accentuated the importance of the energy bridge being built to Crimea from the Krasnodar Region, set to come online later this year. The bridge will effectively end the peninsula's energy isolation, connecting it to the country's united energy network.

For his part, Sevastopol Governor Sergei Menyailo urged city residents to remain calm, while promising that authorities would control electricity prices for the duration of the emergency. He added that he understood perfectly well that "if a normal situation existed in the [country] from which we were cut off, such an emergency could be dealt with in a day or two."

Sevastopol's own cogeneration plant and two mobile stations have been providing the city with electricity at 40% of its total need, with supplies directed first and foremost to social facilities, critical infrastructure, as well as heat and light to the city, its water supply and other utility networks.

Franz Klintsevich, Russian senator and First Deputy Chairmen of the Committee on Defense and Security, offered a much harsher assessment of the situation, suggesting that this artificial blackout of Crimea is an act of terrorism, and a demonstration that Kiev authorities are either incapable of controlling the situation, or on the contrary, have provoked it themselves.

"It was not a secret to anyone that Ukrainian nationalists would not limit themselves to a food blockade, and that they would try to supplement their effort with an energy blockade. In fact, they had repeatedly stated as much themselves," Klintsevich noted.

Kiev's Leaky Blockade of Crimea Degenerating Into Banditry
The senator added that "the blasts blowing up the power lines in the Kherson region near the border with Crimea have left virtually the entire peninsula without power. This is an act of terrorism." Unfortunately, the politician suggested that a real search for the culprits should not be expected from Ukrainian authorities.

Meanwhile, Crimean Prosecutor Natalya Poklonskaya suggested that Russian authorities could launch a criminal case in connection with the downed power lines, pending an interagency meeting of security officials to be held Monday.

Back in September, following rhetoric from the blockade activists that they would cut off electricity supplies, Crimean First Deputy Prime Minister Mikhail Sheremet said that such a blockade would trigger retaliatory measures for Ukraine. Most, if not all of the electricity delivered to Crimea through Ukraine comes from Russia, with Ukrainian territory used as a transit point.