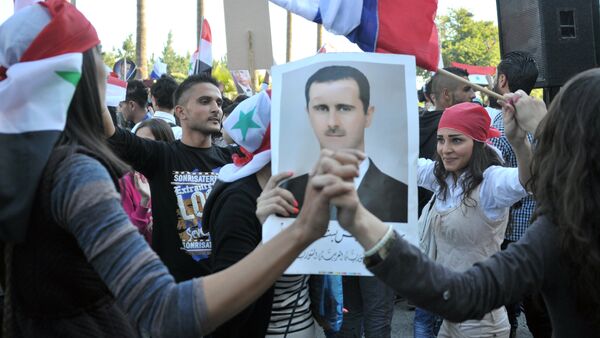 © Sputnik / Dmitri Vinogradov
/
Go to the photo bank
Subscribe
Given the recent attacks in Paris and the ongoing chaos in Libya and Iraq, Western leaders who continue to pursue their post-9/11 war on terror should realize that they have failed to “remake the world in their own image” and any attempt to topple a regime in the Middle East will wind up giving power to “hard-line Islamists”, according to US media.

The post-9/11 war on terror has failed, and from now on it won’t be part of a ”neoconservative project to remake the world in our own image,” according to a political analyst Emile Simpson.

Any attempt to topple a regime in the Middle East will only end up providing power to hard-line Islamists, he said in an article published in Foreign Policy magazine.

The author uses Syria as an example. 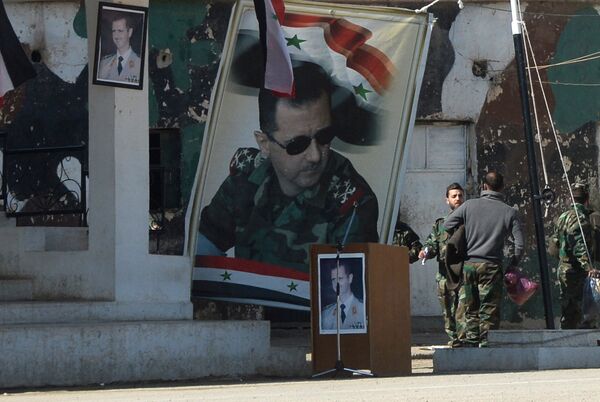 “Syria makes plain that we don’t, actually, have an alternative to Assad,” he says.

“Whatever Assad’s personal fate, dissolving his regime means removing any vestige of state order that remains in Syria, and replacing it with even more chaos.”

“And surely we’ve learned by now that things can always get worse. Syria merely confirms the lesson the West should have learned from Iraq: that the freedom agenda in the Muslim world is dead.” 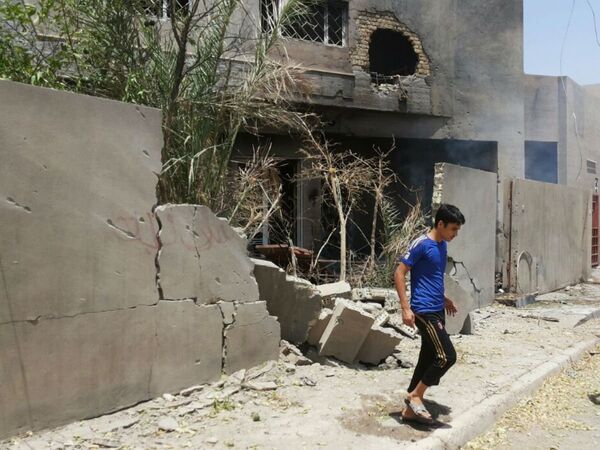 Abdullah Ahmed walks outside his home that was damaged in a bombing in Fallujah, Iraq. The U.S. and its coalition allies have carried out more than 1,000 strikes in Iraq since its campaign began in August - as well as hundreds more by American and Arab air forces in neighboring Syria.
© AP Photo / Uncredited

The author also elaborated that Iraq, where the West tried a “heavy footprint strategy”, and Libya, “where it opted for a light one”, had only proved that “the idea that Europe or the United States can actually execute democratic change by force has been exposed as a fallacy”.

“The notion that regime change leads to a better democratic or a humanitarian outcome is decidedly false,” he stated.

Any potential armed opposition movement in the Muslim world now becomes a potential jihadi branch and the West can’t risk that, he added, acknowledging that any legitimate government is definitely better than any suggested opposition group.

The role of intervention, post-Paris, will be exactly the reverse of the post-9/11 model, he further predicts. Interventions will occur, he says, but only to back fragile governments — not unseat them — without attaching any guarantees of future democratic transformations.

“We should no longer doubt that gaps in fragile states in the Muslim world will be filled by anything other than hard-line Islamists. Sure, there were always terrorist networks like al Qaeda that could set up bases in ungoverned space. But 14 years later, we see how the information revolution has massively catalyzed the formation of jihadist networks.” 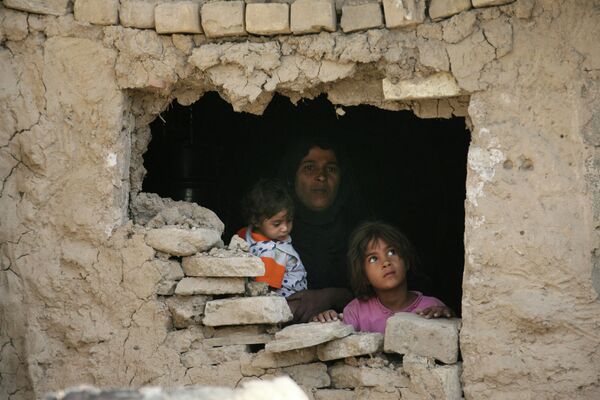 The author says that it has been somewhat fashionable to attack the state since the early 1990s, when liberal interventionists could make claims about the “responsibility to protect.”

Meanwhile, the neo-conservatives were able to make hypothetical claims about democratic regime change that look ridiculous in hindsight, after the nightmare of Iraq.

“That world is now gone, and the state will reassert itself with a vengeance — that’s what Paris means,” he stated.

000000
Popular comments
Syria's President Assad was an impediment to the plans of Qatar (gas pipeline to Mediterranean), Israel (Oil in Golan heights, security), US (strategic advantage in M. East), S. Arabia (Wahabist dominance), Turkey (territorial claims, gaining against Kurds), and others. The rest about lack of democracy is false and mere propaganda. (For example, are S. Arabia and UAE democracies and examples for human rights?)
Athanasios
22 November 2015, 11:36 GMT4
000000
Anglo Imperialism is now officially Terminally Ill. It must now either decide to send the world down in flames with it, or else take its place as one of several world Powers, the dominant force being China, with strong support of Russia and Iran. We shoud rejoice because now the moderate Muslims, Orthodox Christians, Orthodox Jews, Catholics and Hindus of this world have more power. For decades, Anglo America supported Wahabi Islamic Terrorism, along with Protestant and Zionist extremism. They have now been exposed and these movements will decline!
Alexey Yarmolenko
22 November 2015, 12:54 GMT1
000000
Newsfeed
0
New firstOld first
loader
LIVE
Заголовок открываемого материала
Access to the chat has been blocked for violating the rules . You will be able to participate again through:∞. If you do not agree with the blocking, please use the feedback form
The discussion is closed. You can participate in the discussion within 24 hours after the publication of the article.
To participate in the discussion
log in or register
loader
Chats
Заголовок открываемого материала
Worldwide
InternationalEnglishEnglishMundoEspañolSpanish
Europe
DeutschlandDeutschGermanFranceFrançaisFrenchΕλλάδαΕλληνικάGreekItaliaItalianoItalianČeská republikaČeštinaCzechPolskaPolskiPolishСрбиjаСрпскиSerbianLatvijaLatviešuLatvianLietuvaLietuviųLithuanianMoldovaMoldoveneascăMoldavianБеларусьБеларускiBelarusian
Transcaucasia
ԱրմենիաՀայերենArmenianАҧсныАҧсышәалаAbkhazХуссар ИрыстонИронауОssetianსაქართველოქართულიGeorgianAzərbaycanАzərbaycancaAzerbaijani
Middle East
Sputnik عربيArabicArabicTürkiyeTürkçeTurkishSputnik ایرانPersianPersianSputnik افغانستانDariDari
Central Asia
ҚазақстанҚазақ тіліKazakhКыргызстанКыргызчаKyrgyzOʻzbekistonЎзбекчаUzbekТоҷикистонТоҷикӣTajik
East & Southeast Asia
Việt NamTiếng ViệtVietnamese日本日本語Japanese俄罗斯卫星通讯社中文（简体）Chinese (simplified)俄罗斯卫星通讯社中文（繁体）Chinese (traditional)
South America
BrasilPortuguêsPortuguese
NewsfeedBreaking
01:18 GMTUnited Airlines to Layoff 593 Employees for Not Getting Vaccinated
01:05 GMTStudy Shows Massive Drop in Life Expectancy Due to Covid-19 Pandemic
01:01 GMTPhoto: Cuomo Enjoys Fishing Trip With His Dog After Resigning in Disgrace
00:56 GMTLava From Spain’s La Palma Island Volcano Reaches Ocean, Causing Possible Evaporation of Toxic Gases
00:19 GMT‘Making Ourselves Be Respected’: Macron Calls For European Army As US ‘Focused on Itself’
00:01 GMT‘Normal Life’ Won’t Return Without Pfizer’s Annual COVID-19 Vaccine Boosters, CEO Bourla Says
YesterdayUS House Republicans Seek Name of Official Who Approved Drone Strike on Afghan Aid Worker
YesterdayGeorgia Spa Shootings Suspect Pleads Not Guilty to Killings in Fulton County - Reports
YesterdayUS Air Force Chief ‘Hyper-Focused’ on Growing China Challenge in Pacific
YesterdayThere’s a New Sheriff in Town: FC Sheriff Upset Real Madrid in Champions League
YesterdayForgetful Joe Gets His Share of Fact-Checking
YesterdaySterling’s Drop Worries Investors Over State of Economy
YesterdayUS Court Deems Evidence Against Ex-Peruvian President Toledo 'Sufficient' for Extradition - Report
YesterdayACLU Chief Apologizes For Changing RBG’s Quote in Favor of ‘Woke’ Lexis - Report
YesterdayDPRK Claims Tuesday's Missile Test Was of a New Hypersonic Weapon Named Hwasong-8
YesterdayUS Republicans’ Support for Prosecution of January 6 Rioters Plunges 22% - Poll
YesterdayTrudeau Says Next Government Will Focus on Vaccine Mandates, Ending Pandemic
YesterdayEurozone Faces Supply Bottlenecks, Higher Inflation Amid 'Atypical' Recovery
YesterdayUS Tech Stocks Down Most Since March as Inflation, Rate Hike Worry Roil Wall Street
YesterdayMessi Scores His First Goal for PSG in Champions League Game Against Man City