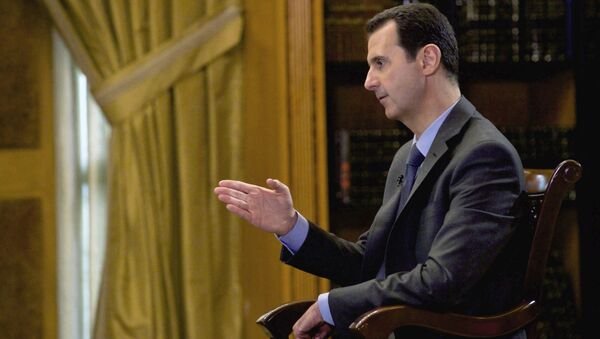 Commenting on the origins of the Islamist terrorism plaguing the Middle East, Syrian President Bashar al-Assad noted that terror groups including Al-Qaeda and ISIL have been able to find fertile soil in Iraq as a result of US interventionism, with Saudi oil money and their poisonous Wahhabi ideology nurturing the groups and helping them grow.

Interviewed by Italy's RAI UNO television, Assad was asked to respond to accusations made by some Western analysts that his government was at least partly responsible for ISIL's creation.

"Actually," the president retorted, "according to what some American officials, including Hillary Clinton, have said, Al-Qaeda was created by the Americans with the help of Saudi Wahhabi money and ideology. Of course, many other [US] officials said the same…ISIL and al-Nusra are offshoots of Al-Qaeda. Regarding ISIL, it started in Iraq; it was established in Iraq in 2006…and the leader of ISIL today – Abu Bakr al-Baghdadi – he was in American prisons, and he was put in New York in their prisons, and then he was released. So it wasn't in Syria; it didn't start in Syria. It started in Iraq, and it started before that in Afghanistan…And Tony Blair recently said that yes, the Iraq War helped to create ISIL. Their confession is the most important evidence regarding your question."

Moreover, according to Assad, ISIL has no natural incubator in Syria, given the country's long-standing ideology of secular nationalism, religious tolerance and ethnic and religious co-existence prior to the war.

Russian Operation Against Terrorists Improves Situation in Syria - Assad
At the same time, Assad warned, if ISIL's poisonous ideology grows roots and becomes chronic, "this kind of ideology can change the society." In the president's words, the terrorists, who have been "supported…in different ways since the beginning of the crisis" by Turkey, Saudi Arabia and Qatar, "and of course the Western policy that supported [them] in different ways since the beginning of the crisis," will lose their strength once they lose the support of their benefactors.

"They can be strong as long as they have strong support from different states, whether in the Middle East or the West," Assad suggested.

Asked to comment on the deadly attacks which took place in Paris earlier this month, the president once again sent his condolences, condemning the "horrible crime" and noting that Syrians like few others can understand the terror of seeing "innocents being killed without any reason and for nothing….We've been suffering from that for the past five years."

Assad emphasized that "we feel for the French as we feel for the Lebanese a few days before that, and for the Russians regarding the airplane that's been shot down over Sinai, and for the Yemenis." At the same time, the president voiced his hope that the Western world would find compassion for the victims of terror from all these attacks, and not "only for the French."

Political Settlement Requires an Accurate Definition of the Opposition

Commenting on the potential for a political settlement to the Syrian crisis, the president emphasized that there could be no discussions on any timetable for settlement so long as the terrorist threat was not dealt with. Otherwise, Assad noted that a year and a half to two years would be enough to create mechanisms for a new political system, including a new constitution, and guidelines on referendums, parliamentary and presidential elections.

Assad: Syrian Settlement Could Take Two Years After Victory Over Terrorism
Regarding disagreements with Western powers over who can be defined as the legitimate opposition, Assad explained that people who hold machineguns in their hand cannot be considered legitimate opposition. "That's the case in every other country. Whoever holds a machinegun and terrorizes people and destroys private or public property or kills innocents –he is not the opposition. Opposition is a political term. Opposition can be defined not through your own opinion; it can be defined only through elections –through the ballot box."

According to the president, only the Syrian people, via elections, can determine who they consider the real opposition. "If you want to talk about my own opinion, you can be opposition when you have Syrian grassroots, when you belong only to your country. You cannot be opposition while you are formed as a person or as an entity in the foreign ministry of another country or in an intelligence office of another country. You cannot be a puppet; you cannot be a surrogate mercenary; you can only be a real Syrian."

Asked to comment on the hundreds of thousands of Syrians who have fled Syria for Europe in recent months, Assad emphasized that "everyone who leaves this country is a loss to Syria…We feel the suffering, because every refugee in Syria has a long story of suffering within Syria, and that's what we should deal with by asking the question: 'Why did they leave?'"

According to the president, Syrians leave "for many reasons. The first one [is] the direct threat by terrorists. The second is the influence of terrorists in destroying infrastructure and affecting the livelihood of those people. But the third one, which is as important as the influence of terrorists, is the Western embargo on Syria." Assad emphasized that many people would go back to Syria in a heartbeat, "but how can he go back…while the basics of his life, his livelihood, has been affected dramatically?…The Western embargo and terrorism have put these people between the devil and the deep blue sea."

Asked by his interviewer whether he considered the Syrian war to be a religious war, the president made clear that this was actually a war with "people who have deviated from real religion; mainly, of course, from Islam, toward extremism, which we don't consider as part of our religion. It's a war between the real Muslims and the extremists. Of course, [the radicals] give it different titles –a war against Christians, a war against other sects…but the real issue is the war between them and the rest of the Muslims, the majority of whom are moderates."