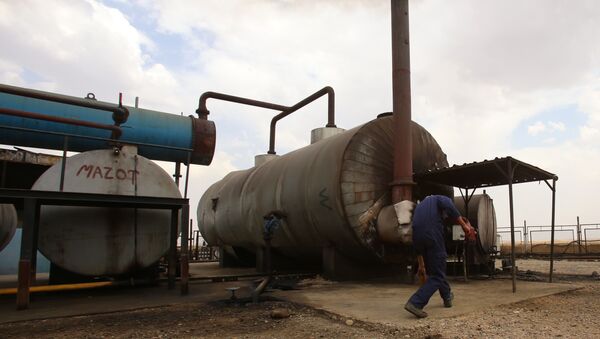 Who is the commodity trader buying ISIL's crude? And is the sharp oil price fall the result of the Islamic State's successful oil trade, Tyler Durden asks.

Incredibly, it has taken over a year for the US-led anti-ISIL coalition to recognize that the Islamic State's funding is significantly dependent on crude, extracted by ISIL from captured oil wells, anonymous analyst for the financial website Zero Hedge Tyler Durden underscores.

"Still, without a doubt, the dominant source of funds for the terrorists is oil, and not just oil, but a well-greased logistical machine that keeps thousands of barrels moving from unknown pumps to even refineries, and ultimately to smugglers who operated out of Turkey and other countries," Durden wrote in his recent piece.

Those Who Fuelled Extremism in Syria Now Mourn Paris Attack Victims
But what is even more curious, is that Pentagon officials admitted that for more than a year they deliberately avoided targeting tanker trucks under the pretext of possible civilian casualties. However, that changed on November 16, when US Air Force and two gunships eradicated 116 oil trucks, the analyst elaborated.

"So any qualms about vaporizing 'innocent civilians' promptly disappeared when the Pentagon realized that its 1+ year-long campaign had been an epic debacle," the analyst remarked.

At the same time it is still begging the question whether the sharp oil price fall was prompted by ISIL's machinations in the global oil market. Is it a mere coincidence that Brent and WTI began their swift tumble last autumn when the Islamic State appeared on the world arena?

Isn't it time #Congress investigate who is buying #OIL from #ISIS #ISIL? Who is giving them the money to kill us? pic.twitter.com/5EmhBY0o7U

Furthermore, Durden poses yet another question, wondering what commodity trading firms are buying millions of barrels of stolen oil and then reselling the crude to other interested parties? Who are these middlemen?

"What we do know is who they may be: they are the same names that were quite prominent in the market in September when Glencore had its first, and certainly not last, near death experience: the Glencores, the Vitols, the Trafiguras, the Nobels, the Mercurias of the world," Durden elaborated, adding that some prominent 'families' have never had scruples about funding terrorists in the past.

Washington Cares More About Dead Westerners Than About Victims of Its Wars
Which ones are guilty is still shrouded in secrecy, however, there are no doubts that they know perfectly well that they are collaborating with ISIL, Durden insists.

According to the analyst, whoever the mysterious "middleman" is, he is most likely well known to US intelligence services, and thus to the Pentagon, and thus, to the American government.

So, "who is the commodity trader breaching every known law of funding terrorism when buying ISIS [ISIL] crude, almost certainly with the tacit approval by various ‘Western alliance' governments, and why is it that these governments have allowed said middleman to continue funding ISIS for as long as it has?" Durden wondered.