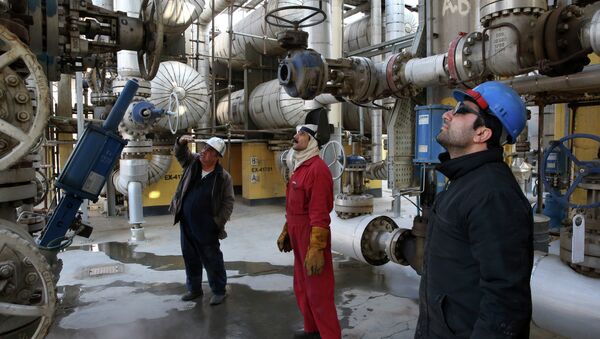 Tehran would coordinate its steps with OPEC, the country's deputy petroleum minister said.

"Within the next 5-6 months we will increase oil production by approximately 1 million barrels a day," Zamaninia told reporters on the sidelines of the Gas Exporting Countries Forum (GECF).

"We expect this to be done within the OPEC framework," the minister stressed. "We expect to raise [crude] production and exports, but only if the OPEC [production] quota remains unchanged."

The deputy petroleum minister said that Tehran would coordinate its steps with the Organization of the Petroleum Exporting Countries, which is a group of 12 oil exporting countries. The daily OPEC quota stands at 30 million barrels a day.

In August, Iranian Foreign Minister Javad Zarif said that the lifting of Western sanctions against Iran, following the signing of a groundbreaking nuclear deal, would eliminate all barriers for trade.

Asian Refineries Prolong Contracts With Iran That May Quadruple Oil Export
After the P5+1 deal with Tehran was struck in July, industry experts told Sputnik that Iran would try to sell as much of its stored oil as quickly as possible even if it meant engaging in a price war.

OPEC member countries are due to meet on December 4 to assess the oil cartel’s production policy and the global oil market.

At its last meeting in June, OPEC made a historic decision not to cut its oil production levels despite a slump in global oil prices. The decision was backed by Saudi Arabia and its Gulf Arab allies, who are eager to protect their market share against cheaper shale oil.