The Jury is Out and the G20 Shutters at the Verdict 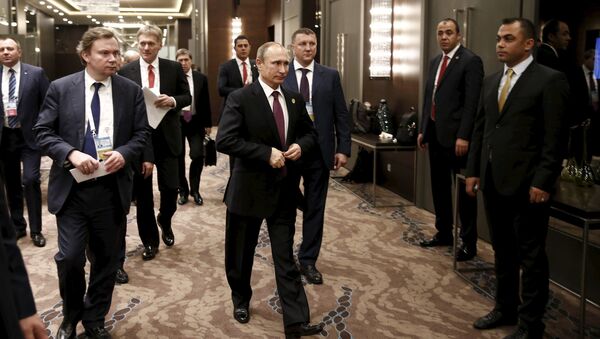 It was almost imperceptible; most people probably missed the sliver of a smile from Vladimir Putin as he leaned in to talk with American President Barack Obama at the G20 in Antalya.

Phil Butler — Not so many noticed either, the "handwriting" gesture from Putin just before the casual meetup in front of cameras ended. It hit me last night like a scene from the Daniel Craig film Spectre, "the writing's on the wall," Putin had won. ISIL will soon be over. We still have a chance for world peace.

When ISIL terrorists slaughtered those innocents in Paris the other day, the extremists essentially beheaded themselves. The message has just not reached their feet I guess. Key to the power play in Cold War II, France and Germany had already bucked the traces of an Obama-Cameron led policy war on Russia. Mr. Hollande and Mrs. Merkel had already orchestrated Minsk II remember, and the Americas and Brits simply did not like that game.

Regional Hegemon: Saudi Arabia 'Playing Dirty' in Middle East
Do you recall independent media chiming in on the EU-America disconnect coming? Well, it arrived via a horrid and ghastly event. The French people marching through the tunnels of the Stade de France singing their national anthem, even knowing another bomb could go off any second, this was a stunning reminder of how tough those people really are. Courage, dignity, Russian or French, Syrian or Kenyan, its face is unmistakable.

For Obama and the forces of "whatever" our president has been a force for, the final straw that broke America's hold on Europe was at once subtle and unmistakable. I referred to the moment briefly, when I first reported about the Paris attacks the other day. New York Times and other western coverage showed it, bold as day, and in the face of anybody paying attention. The videos, the accompanying footage of, first the sirens and carnage, then Mr. Hollande's message, and then Big Brother Obama brandishing his military, talking militarism and revenge, even before the dead were laid to rest. I did not realize it at the time, but it was a "highjack" attempt by the American president. Unlike Putin and the other world leaders, Obama simply had to upstage even the victims. His PR people, they are idiots.

Monsieur Hollande clearly did not appreciate the gesture, the lack of savoir-faire, if you will. The French, by order of their commander in chief, bombed the hell out of Al-Raqqah in Syria hours later. Moderates and US backed jihadists be damned, the message only became clear to me this morning, the writing gesticulation from Putin to a head down Obama meant "put that in writing Mr. Obama," that your war on all these leaders is over for now. Looking at Putin with Angela Merkel at the G20, I could not help but admire her a bit.

In Bush's Footsteps: Paris Adopts Measures Similar to US Patriot Act
The moderation, the standing in the middle of a shit storm of monumental proportions, Germany's leader did her best for everyone. And she looked it talking to Putin, glancing down, tired, probably feeling the 175 year old she resembled. My colleague commented on seeing the photo, "Putin is consoling her, it appears. He seems to be saying it's okay Angela, we are friends." Maybe, just maybe this is how it all runs. Obama says "Minsk must be finalized." Putin threatens to drop dime on 40 of the New World Order (NOW) funding the terror and killing. The game is up; they have no more moves left. He won, and I know how (read to the end). Oh yeah, he did that.

France just told the United States to take a hike. The NWO has been threatened with a big searchlight on their activities, Putin has them one step from pitchforks and plowshares across Europe, the Middle East, Australia and America. The people are not so stupid. Russia blistering ISIL in days not years, in the wake of a US campaign against desert ground hogs, the idiocy is with the arrogant exceptionalists. Putin played his cards close, close until it was time to call. He told an audience at the G20:

"I've shown our colleagues photos taken from space and from aircraft which clearly demonstrate the scale of the illegal trade in oil and petroleum products. The motorcade of refueling vehicles stretched for dozens of kilometers, so that from a height of 4,000 to 5,000 meters they stretch beyond the horizon."

Is West's Anti-ISIL Campaign Still Really Aimed Against Bashar Assad?
Even worse for the Obama administration, when US warplanes finally did attack an ISIL oil convoy in the deserts of Syria, it was another "hijack" attempt by Obama to appear effective alongside France's bombings. Yes, no ISIL convoy or oil infrastructure attack has ever been conducted by the US led coalition. Only when France was ready to tell Obama to FO, did several US planes bomb the hell out of ISIL's blood supply. And for a real kick in the pants, guess where a large portion of this oil goes? You already know the answer, don't you?

Israel has more to do with Arab Spring and Syria's civil war than ISIL does. Fully 75% of Tel Aviv's oil comes from areas of Syria and Iraq partially controlled by ISIL. That says nothing for huge energy deals in the Golan Heights and offshore Israel, Lebanon, and Syria. Israel has been funding ISIL directly, through the purchases of energy sent through Turkey via pipeline and truck convoy. Putin has this info already, and he just announced he'll lay it out if they keep pushing. The bottom line is, the US has been flying air cover for terrorists.

The implications of all this should have been clear to this writer the moment Vladimir Putin stepped off his plane in Ankara. Sorry to surprise you, but body language and human tendency can tell us a lot, especially about Vladimir Putin. Let me explain.

Video of Putin's arrival to Turkey and the G20 is not extraordinary save one moment. Walking down the steps from the cabin door, Putin is met by two children in traditional garb and holding flowers. Delighted, as per usual (Putin loves kids clearly), the Russian president bends down to embrace and kiss the little children. It is then, in a subtle but noticeable gesture so uncharacteristic of him, that his excitedness and anticipation of the meeting to come shows. Usually Vladimir Putin would linger at any presence of children, in deference to adults or any meeting etc. This time, albeit gently and tenderly, he stands to sweep past the little kids. Head focused ahead, after shaking some hands, Russia's president boards the limo headed to his rendezvous. When I noticed this nuance, it made no sense to me. It does now.

Speaking to the G20 audience, Putin rounds up all the chaos we've witnessed these past 24 months. To Ukraine, he offers postponement and a no interest loan extension on gas debts owed. However powerful Putin's play, and his message is though, the Washington alliance has is resilient in efforts to salvage the new Cold War game. Secretary of State Ash Carter voices the NATO bugle to draw European nations to the banner of America over Syria still. New French attacks on IS reverberates Hollande's resolve, while Obama's team shifts for an apparent back stab on Putin again.

Friend in Need: Russia is Becoming 'Indispensable Global Power'
It's a vicious game of cat and mouse, school-yard nastiness played out on the world stage. My contemporaries comment often on "how can Putin bear to talk to them?" This brings me to the "why" of Vladimir Putin's superiority over all these western politicians. Amid all the muck and mire of foreign policy recently, a simple truth emerges not many see. Putin and Russia have been on the up-and-up mostly, and defending the truth beats the shit out of defending a big, obvious lie. Russia attacked no one, NATO and the western oligarchs put the thumb screws to Russia, period. All the rest of this can be summed up in one sizzling bit of imagery. Imagine a Russian airliner landing safely in St. Petersburg. Then imagine Paris people leaving a concert, going out to dinner, then going home after a pleasant evening out. Instead of them being dead, gone, murdered by people America was supposed to be bombing to hell in back for 14 months! Imagine a couple of million refugees at home, playing ball, cooking dinner, maybe watching the TV.

Instead of seeing them on the  television from the comfort of your home, cold, afraid, hungry, and alone, weary from having walked half way around the world to find safety. Beyond this, try and imagine a Muslim community in Western Europe that has been fully integrated, made part of the whole of nations here. In Germany, I try and imagine a village where the Turkish shop is not just some unique grocery shopping experience for Germans. The Lebanese restaurant owner, or any so-called "auslander" is not spat out like an epithet. Yes, an American in Germany sees these not so subtle colloquialisms. Where I come from they used terms like "nigger" or darkie, and more recently "wet backs" — oh how we Americans hate when those subjects are brought up.

Now imagine Vladimir Putin did not give the order to intercede in Syria. Imagine how powerful and far reaching ISIL's reach would be, once the Levant became a sovereign state. You realize of course this was one reason for creating ISIL, don't you? Syria partitioned a divide-and-conquer for energy titans to take advantage of.

And Americans learned to fear and hate Muammar Gaddafi. Thank God for Vladimir Putin. I pray he continues to win, the alternative is unthinkable.