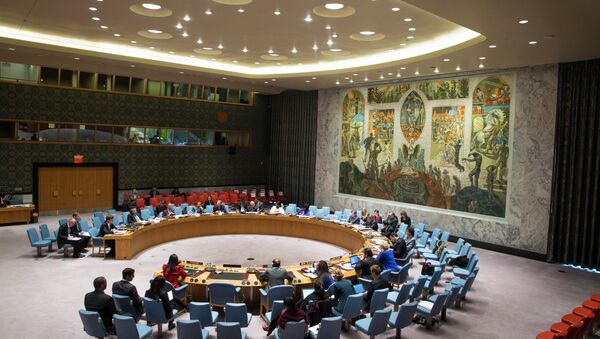 The UN Security Council has unanimously adopted a counter-terrorism resolution based on a French draft.

UNITED NATIONS (Sputnik) – The UN Security Council has unanimously adopted a counter-terrorism resolution, based on a French draft but with some changes including the addition of a reference to the UN Charter requested by the Russian Federation.

The resolution states that "the Islamic State in Iraq and the Levant (ISIL, also known as Da’esh [or IS]), constitutes a global and unprecedented threat to international peace and security, and reaffirming that the Al-Nusrah Front (ANF) and all other individuals, groups, undertakings and entities associated with Al-Qaida also constitute a threat to international peace and security."

The resolution condemns the November 13 Paris terrorist attacks that ISIL has claimed responsibility for, as well as the October 31 Russian A321 plane crash over Egypt.

France Attacks ISIL Oil Assets in Syria After UN Resolution
It calls on all UN member-states "to redouble and coordinate their efforts to prevent and suppress terrorist acts committed specifically by ISIL also known as Da’esh as well as ANF, and all other individuals, groups, undertakings, and entities associated with Al Qaeda, and other terrorist groups."

The resolution stresses the importance of eradicating the "safe haven" established by ISIL radicals in Iraq and Syria.

On Thursday, French diplomats distributed a draft resolution that called on UN Security Council member-states to "redouble and coordinate their efforts" against Islamic State (ISIL) in the wake of the Paris terrorist attacks that took the lives of at least 129 people. ISIL has claimed responsibility for the attacks.

The French-proposed document emerged a day after Russia submitted a renewed text of a separate draft resolution, first submitted on September 30.

The draft called for global counter-terrorism action based on the principles of international law, stipulating that any anti-terrorism operation on the territory of a foreign state, such as Syria, must be conducted with the permission of the state’s authorities.

Russia has been conducting airstrikes against ISIL radicals in Syria at the request of Syrian President Bashar Assad, while a US-led international coalition, which includes France, has been targeting ISIL positions in the country without the permission of Damascus or the United Nations.