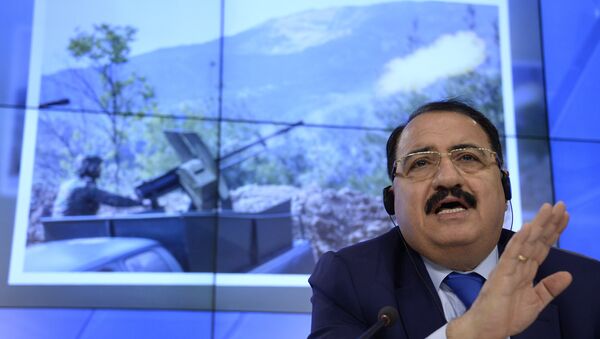 © AFP 2021 / ALEXANDER NEMENOV
Subscribe
The Syrian army fights against all terrorist groups on its territory.

"From the first, the Syrian national army is fighting against all terrorist groups on its territory in an imposed war. These groupings fall into 2,000 different groups, the most important of which is the Islamic State and [many] other under the same names and units," Riad Haddad told reporters.

According to Haddad, when the Russian Air Force began its aerial campaign, small groups of terrorists united with the Islamic State jihadists.

"At the moment, the Syrian government army carries out ground operations with the support of the Russian operation. We have in mind that the Syrian army has made great strides on the ground, a lot of fighters run toward the Turkish border," Haddad stressed.

According to the diplomat, anyone visiting Damascus can see the words "Thank you Russia" in the capital’s streets.

He also pledged to continue the anti-terror fight.