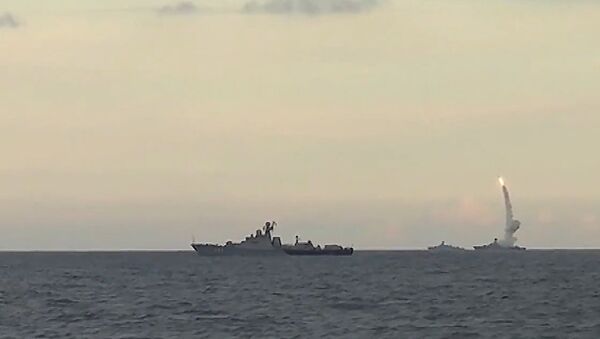 "On November 20, warships of the Caspian Flotilla have launched 18 cruise missiles on seven [terrorist] targets in the provinces of Raqqa, Idlib and Aleppo. All targets were destroyed," Shoigu said in a report to president Vladimir Putin.

"In the whole, during the aerial operation cruise missile were launched from the Mediterranean and Caspian Seas over a distance of up to 1,500 km, and aircraft were taking off from Russian and Syrian airfields. From the Caspian Sea, 29 aircraft of the long-range and bomber aviation were involved in the airstrikes."

According to Shoigu, ten ships are involved in Russia's military operations in Syria, six of them are in the Mediterranean Sea.

"In the past four days, Russia's strategic and tactical aviation carried out 522 combat sorties, a total of 101 air-and sea-based cruise missiles were launched, some 1,400 tonnes of bombs of various types were dropped."

He added that during the mission the operational range of Tu-160 strategic bombers from the Mediterranean was over 13,000 km.

"A total of 826 enemy targets were destroyed," Shoigu added.

"Each day, 143 sorties are carried out. The sea fraction includes ten ships, six of which are in the Mediterranean Sea," the minister said.

"In accordance with your instructions, the [Russian] Armed Forces are carrying out a retaliation operation to destroy the leaders of terrorist organizations and their supporters, disorganize their control and logistics systems, as well as destroy ISIL military and oil and gas infrastructure."

He added that "in this regard, the aviation group has been doubled and increased to include 69 aircraft."

The Russian Aerospace Forces are focused on undermining ISIL's financial base, the minister said.

"Main efforts are focused on destroying the ISIL financial and economic base. A total of 525 tank trucks and 15 storage and refinery facilities have been destroyed in the operation."

As a result of a cruise missiles' strike on just one jihadist target, over 600 ISIL terrorists were destroyed in Syria's province of Deir ez-Zor, Shoigu said, adding that terrorists are suffering major losses.

"Twenty three terrorist training bases, 19 plants producing arms and explosives, 47 depots with ammunition and funds, as well as other objects were destroyed."

"This helped the Syrian government forces to continue successful actions in the provinces of Aleppo, Idlib, mountainous Latakia and Palmyra."

Russia's military action in Syria is carried out well, but is not enough to free the Arab Republic of terrorism and protect Russia from potential attacks, President Vladimir Putin said during a video conference with military commanders, thanking them for their work.

"The tasks are being carried out, and they are carried out well," Putin said Thursday.

"But this is so far not enough to clear Syria of fighters, terrorists, and shield Russia from possible terrorist attacks," the president added. "There is a lot of work ahead of us and I hope the next stages will be carried out just as professionally, and bring the expected results."