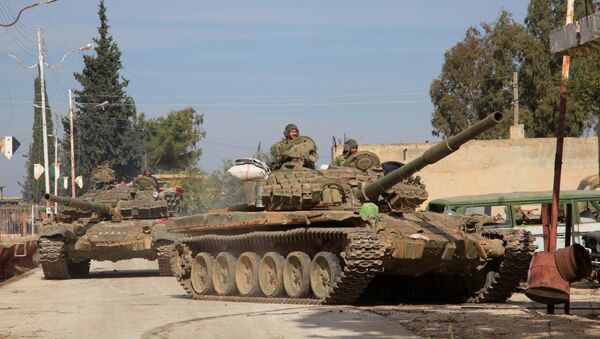 Russian jets have carried out 394 sorties from the Hmeymim airbase in Syria in the last three days, base commander Alexey Maksimtsev told Russian President Vladimir Putin during a Defense Ministry briefing.

The airstrikes by the Russian Aerospace Forces have helped the Syrian Army advance in all directions, with the most progress made outside Aleppo and in the mountainous area of Latakia, Major General Alexei Maksimtsev, Commander of the Russia Air Force Unit at the Hmeymim air base, reported to Russian President Vladimir Putin.

"Airstrikes targeted 731 militant command points in the provinces of Aleppo and Idlib, and outside Palmyra. In addition, the air force unit was augmented with eight Su-34 bombers and a squadron of Su-27SM3 jet fighters which were involved in destroying targets in the provinces of Raqqa and Deir ez-Zor," Maksimtsev said.

He underscored that surveillance of all types has been conducted in Syria to guarantee hitting all militant targets.

The general pointed out that during the massive airstrikes, gas and oil producing facilities, command points, ammo depots, training camps and missile-manufacturing factories were destroyed.

"That has contributed to damaging the command network and economic structure of terrorist groups," he added.

"Russian strike aircraft continue to launch massive airstrikes. There are no casualties among the personnel, as well as no losses of equipment."