Pope Declares Christmas a ‘Charade’ Amidst So Much ‘War and Hate’ 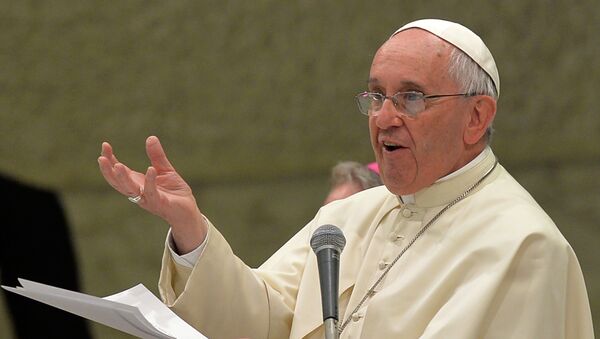 © AFP 2021 / ANDREAS SOLARO
Subscribe
Festive Christmas celebrations seem hypocritical in light of the violence, bloodshed and hate that plague the world, says the leader of the worldwide Catholic Church.

Facebook and Consumerism are Eating Us Alive, Laments Pope Francis
"Christmas is approaching: there will be lights, parties, Christmas trees and nativity scenes… it's all a charade. The world continues to go to war. The world has not chosen a peaceful path," Pope Francis said during a sermon on Thursday.

His statement came before news of at least 29 people killed in a hotel siege in Mali's capital Bamako, but as the world reeled from recent terror attacks in Paris and Beirut, and the bombing of the Russian airliner over Egypt's Sinai Peninsula, Pope Francis condemned hate-fueled violence, and suggested that instead of reveling in celebrations, the world should feel remorse and ask for "grace to weep."

"We should ask for the grace to weep for this world, which does not recognise the path to peace. To weep for those who live for war and have the cynicism to deny it," the Pope said, adding "God weeps, Jesus weeps."

"Those who make war are damned, they're delinquents. War can be 'justified' for many reasons. But when the whole world is at war, as it is today… there is no justification," the pontiff said.

The Pope's statements came as the Vatican marked the start of what has traditionally been a festive season, with the unveiling of a 25-meter Christmas tree delivered to St. Peter's square from Germany's Bavaria, former pope Benedict XVI's homeland.

The pine will be decorated before the Vatican's Holy Year begins on December 8, with Christmas ornaments made by cancer-afflicted children from all over Italy.

Pope Francis has high hopes for the end of war, and has been praised many times for his gestures toward peace. During his first visit to the US two months ago, President Barack Obama recognized the contribution of Pope Francis toward normalization of US-Cuba relations.

At the UN General Assembly in New York in September, the Pope condemned the persecution of religious and ethnic minorities and the destruction of cultural sites in the Middle East and North Africa.

000000
Popular comments
I like the profound poetry of pope's words...they genuinely proclaim new times for the world and christianity....and how are we oblivious to our loss when it is time to celebrate...