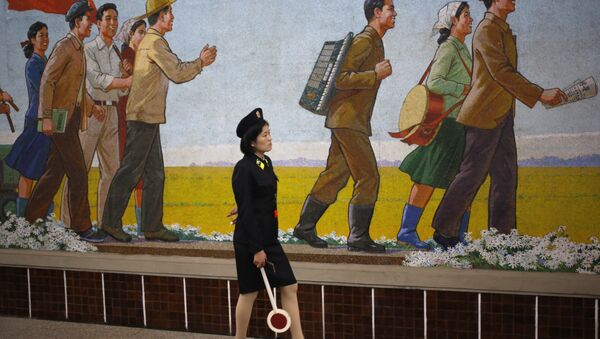 © AP Photo
Subscribe
North and South Korea agreed on Friday to hold high-level talks next week, in an attempt to ease border tensions. It will be the first government-level meeting since an armed standoff in August.

On November 26, North and South Korean government officials will attempt to address the mounting pressure between their two countries. It follow's Seoul's acceptance of a North Korean proposal to discuss sanctions and diplomatic relations between the two neighbours.

#ROK unification ministry confirms Seoul has agreed to hold talks with #DPRK at Tongilgak in the North on Nov. 26. #VOAalert

Prior to the outreach from Pyongyang, South Korea had tried on several attempts to bring North Korea to the table, but had been rebuffed. The North's Committee for the Peaceful Reunification of Korea in charge of daily inter-Korean affairs welcomed the news.

"It is a relief that the North has accepted Seoul's offer for dialogue," said an official at the Unification Ministry. The announcement marks months of attempts to scale down from the August inter-Korean crisis.

On August 4, two South Korean soldiers on patrol in the Demilitarized Zone (DMZ) were maimed in a landmine explosion. The South Korean army believed that the landmine had been planted by North Korean special forces, who had infiltrated the DMZ.

In response, both sides engaged in tit-for-tat retaliation. South Korean forces switched on loud propaganda speakers in the DMZ, not used since 2004. The North Koreans reacted by shooting rounds of light ammunition in the direction of the loud speakers. In turn, the South Korean side retaliated again by shooting back 29 rounds of 155 mm shells.

After three days of growing world anxiety, the two sides agreed to an uneasy truce. But the tensions have not been fully dissipated as prior to Friday's news, no government talks had been made possible.

North Korea has since expressed "regrets" for the maiming of the two soldiers from the South, although it still denies responsibility.

And in the lead up to next week's meeting, both sides have been making their pre-conditions known.

Meanwhile, North Korea has urged Seoul to lift its punitive sanctions on the North, which have halted almost all commercial exchanges between the two sides.

Friday's development comes in the same week there have been unconfirmed reports of a scheduled visit to North Korea, also next week, of U.N. Secretary General Ban Ki-moon. If the trip does go ahead, it's hoped that he would help improve Seoul-Pyongyang relations.