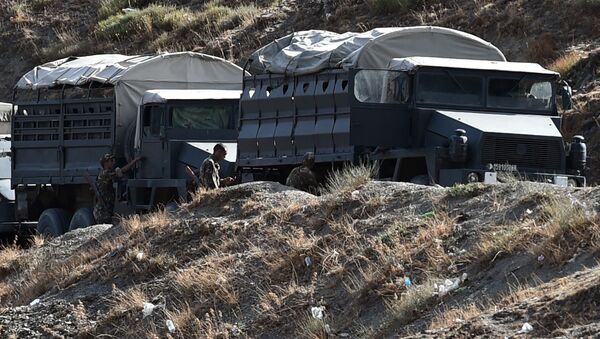 © AFP 2021 / FAROUK BATICHE
Subscribe
The Algerian chief of staff has raised the alert level and mobilized the troops on the Malian border, after a hotel in the Malian capital Bamako was taken hostage by extremists, an Algerian official told Sputnik on Friday.

At Least 3 Dead as Hostage Crisis in Mali Hotel Continues
ALGERIA (Sputnik) – The Algerian army took part in an emergency meeting Friday, where the corresponding decision was made, the official said. The authorities also strengthened the border entry points with Mali after the attack.

"We await the terrorist attempts to enter Algeria from any region, so we have raised the alert level in all border regions. Since last Friday, we have had unconfirmed reports about terrorists possibly entering the country to carry out attacks in the south of the country, particularly this is related to oil objects," the official said.

Earlier in the day, several gunmen took scores of people hostage in the Radisson Blu Hotel in Mali's capital. According to French media, at least three people have been killed by the terrorists.

Mali has been in turmoil since 2012, when violent extremist tribes took control over large areas in northern Mali, and various Islamist groups, including the Boko Haram terrorist group, initiated operations in the country.

000000
Popular comments
Can someone remind me what was a confict in Mali I think at the beginning of last year about? Were there some Tuareg rebels? And I think there was also some terrorist attacks in Algeria last year? Am I right?