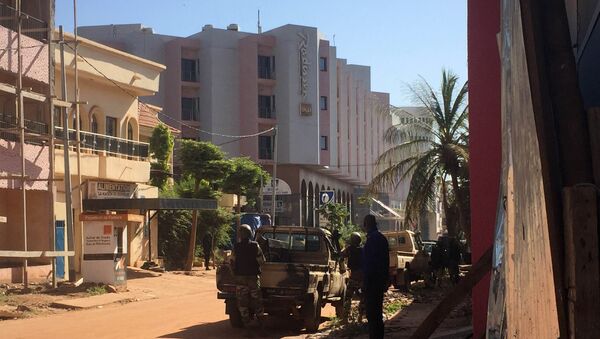 © AFP 2021 / SEBASTIEN RIEUSSEC
Subscribe
The death toll from the Mali hotel hostage situation has risen to 29, including two militants, according to the United Nations. Mali's prosecutor later estimated that at least 20 had been killed, with 7 injured.

According to the prosecutor, the injured included three law enforcement officers.

A UN official, speaking on condition of anonymity to the Associated Press, stressed that the operation is still ongoing, but that so far 27 bodies have been found in the building.

"They came to kill, not to take hostages," Salgado said of the gunmen, according to ABC News.

According to the US State Department, members of America's diplomatic mission to Mali were at the hotel at the time of the attack, but were rescued. The State Department also stressed that there was no active US military involvement in ending the hostage situation.

"I can confirm that all the Chief-of-mission personnel who were at the hotel at the time of the attack are accounted for and in a safe location," State Department spokesperson John Kirby announced.

The State Department later confirmed one US citizen was killed in the incident.

Security forces were still moving from room to room, searching for additional casualties.

Militants took roughly 170 people hostage after storming the Radisson Blu Hotel in the capital of Bamako earlier on Friday.

According to local media, an affiliate of the self-proclaimed Islamic State terrorist group claimed responsibility for the incident.

The hotel is a popular tourist destination, and officials say that citizens from 14 countries were present at the Radisson Blu when it was attacked. These include foreign nationals from Algeria, Belgium, Germany, India, Spain, Canada, China, Cote d'Ivoire, Morocco, Russia, Senegal, the US, and Turkey. Fourteen of the hostages taken were French.

The French government has launched airstrikes and sent ground troops into Mali, a former French colony, within the last two years ago to counter terror groups linked with al Qaeda.

"Our highest concern is the safety of all our guests and employees in the hotel," the hotel said in a statement. "We are in constant contact with the authorities there and will share further information with you when we have it."