Belgrade-Pristina Dialogue Bogged Down Due to Kosovo Lack of Implementation 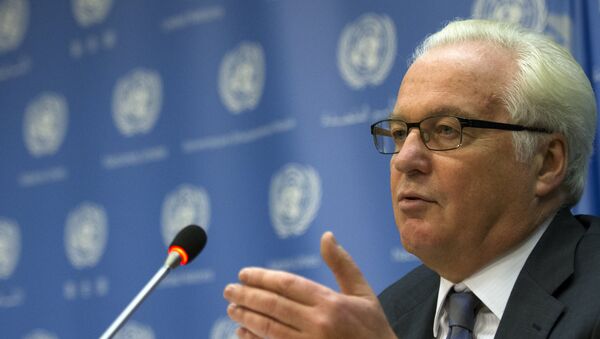 Russia's Permanent Representative to the United Nations Vitaly Churkin said that dialogue between Belgrade and Pristina, carried out with EU mediation, is bogged down.

UNITED NATIONS (Sputnik) – Dialogue between Belgrade and Pristina, carried out with EU mediation, is bogged down, Russia's Permanent Representative to the United Nations Vitaly Churkin said, claiming that the underlying reason is a halt by the Kosovo side of the implementation of key agreements.

"[EU] Claims of the impossibility to comment on Kosovo’s legal procedures are simply unconvincing. Such an approach could be used to sabotage any agreements. It is common knowledge that the EU studies legislation – Serbian legislation, rather, with a magnifying glass, and even forces certain legal decisions on Belgrade, making conditional progress on Serbian, progress towards European integration on it," Churkin said during a UN Security Council debate on Kosovo on Thursday.

According to the Russian envoy, Kosovo is not implementing the August agreement on the creation of an Association/Community of Serb Municipalities.

Serbia Will Retain Sovereignty Over Kosovo in Constitution
In 1998, an armed conflict broke out between Kosovo Albanian militias seeking independence for Kosovo and Metohija, against Yugoslavian forces. The following year, NATO intervened in the conflict without UN approval, and began bombing Yugoslavia.

Belgrade subsequently lost control of Kosovo, as the Serbian government had to agree on the presence of a NATO military contingent in the area, and a transition of territory under UN administration.

In 2008, the Albanian government of Kosovo declared its independence from Serbia.

Unlike the United States and some European countries, Russia, siding with Belgrade, does not recognize Kosovo statehood, believing the region is part of Serbia.