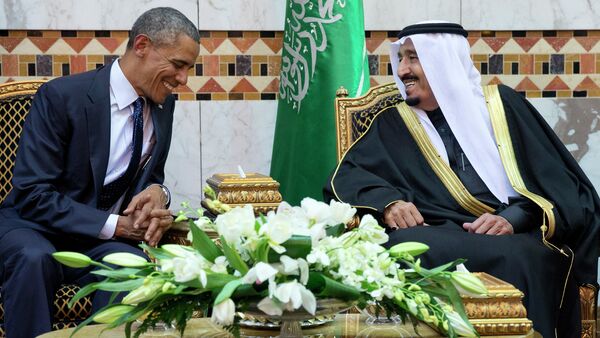 Backed by the US, Saudi Arabia is consistently pursuing its goal of becoming a regional hegemon; however, Saudi Arabia is slowly cutting its own throat by funding radical extremists in the Middle East and undermining the sovereignty of Syria and Yemen, Ron Paul notes.

The Paris tragedy has prompted a strong reaction from the international community: Western leaders are calling for terrorists to be eliminated in Syria.

Former American congressman, author and politician Ron Paul poses the question whether more killing, more bombing and more spying could be considered as a way out of the ongoing crisis.

"No one in that region [Middle East] has attacked the United States of America, our national security has never been challenged, we don't have a need to have a real declaration of war that would permit events of bombing," Dr. Paul remarked in his recent conversation with Daniel McAdams for Liberty Report.

Why is Washington Turning Blind Eye to ISIL's Gulf Funding Sources?
The politician, however, drew the attention to another aspect of the war against terrorism. Referring to statistics provided by the US influential Brookings Institute, Dr. Paul pointed out that the largest number of Twitter users supporting the infamous Islamic State originate from Saudi Arabia.

What does that mean and is Saudi Arabia America's friend or foe?

Americans have got used to the notion of Saudi Arabia being a friend and a longstanding ally of the US in the Middle East.

Back in the 1980s Saudi Arabia helped the US to expel the Soviets from Afghanistan, the US politician noted.

Western Crack Down on Extremism Only Provokes More Hatred at Home
"There were lots of weapons and things, and radicalization and madrassa schools in Saudi Arabia which we justify and say: 'Oh, that's good, that is not exactly our way, but this will help us to defeat the Soviets'," Paul remarked.

Alas, the consequences of this collaboration were dire: the emergence of the Taliban upset Washington's applecart in Central Asia and resulted in a decade-long war.

Today Saudi Arabia is seeking to become the regional leader in the Middle East. It is waging war against Yemen and supporting anti-Assad forces in Syria. It should be noted though, that not everything is rosy in the garden of the Saudi economy due to a significant slump in oil prices.

"The perpetual wealth machine is running out and that's why people in Saudi Arabia are disturbed. They have poverty in Saudi Arabia, believe it or not, even with all that oil 25 percent live in total poverty," the former US congressman stressed.

According to the experts, "the head-chopping Saudis" are facing a "slow-motion suicide." While the Saudis' wealth fades, Bashar al-Assad is still standing at the helm of the government, despite the Gulf-sponsored war against Syria.

"Still the US continues to coddle the Saudi tyrants, this week announcing that it would sell them $1.3 billion worth of bombs to drop on the suffering Yemenis," the experts pointed out.