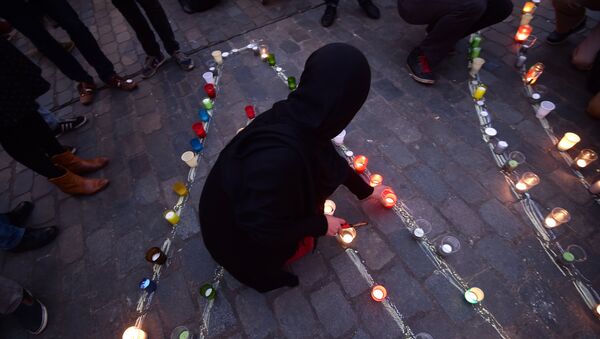 © AFP 2023 / EMMANUEL DUNAND
Subscribe
International
India
Africa
A Russian news crew looking for the relatives and friends of a suicide bomber, who detonated explosives during Friday night’s international soccer game between France and Germany at the Stade de France outside Paris, have been assaulted and beaten up in the Belgian capital of Brussels, the journalists said Thursday.

The NTV television crew was attacked during an interview with some 10 young residents of the unspecified northern Brussels suburb where the suicide bomber was reported to have lived.

"A few minutes later, one of them attacked the cameraman and tried to snatch the camera. He punched and kicked, and then the whole crowd pounced on us," one of the reporters, Konstantin Panyushkin, was quoted as saying on the NTV website.

Panyushkin said the assailants stole a backpack with documents, money and a laptop.

Some of the culprits have since been arrested following the attack, the broadcaster noted.

Paris Suicide Bomber Used Bogus Syrian Passport to Reach France – Reports
The NTV crew was seeking to interview relatives or acquaintances of one of eight suspected assailants of the November 13 suicide bombings and mass shootings that killed 129 people and injured over 350.

An overnight raid conducted in the northern Paris suburb of Saint-Denis saw a gunman killed, a female suicide bomber self-detonate and seven suspects arrested. Authorities are investigating whether Abdelhamid Abaaoud, the alleged attack planner, is among those killed.